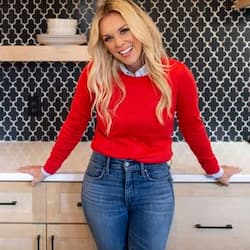 Kortney Wilson (born Kortney Galerno) is a former country music singer and television personality. She is the co-host and lead designer of HGTV’s Making It Home with Kortney and Kenny alongside Kenny Brain.

She is the daughter of Ken Galerno and Karrie Galerno. Her father was a professional hockey coach who later moved them to Kitchener. She has three siblings, twins Kelly and Kevin and Krista.

Kortney was married to Dave Wilson for 14 years before they separated in 2019.  The couple first met in Nashville while they were both musicians. At the time Dave was living in London, England and had gone for two weeks on a writing vacation in Nashville (he was in a band). The couple was introduced by a mutual friend and they became friends and began living together as roommates.

In an interview, Kortney said she called her parents a month later to tell them she had fallen in love while Dave called his band saying he wasn’t going back to London. They got married in 2001. On December 19, 2020 the couple released a joint statement saying they had decided to separate.

Kortney and her ex-husband have three children together, two sons; Jett Wilson and Sullivan “Sully” Wilson and an adopted daughter Lennox Esmee Wilson, whom they adopted in 2007.

Kortney is in a relationship with Ryan. Not much is known about him but she posts him on her social media accounts.

Kortney is a former country music singer. She began her singing career performing as Annie with Royal City Musical Productions in Guelph in 1994. In 1998 she had signed a management deal with Scream Marketing and Christy DiNapoli, a publishing deal with Scream Music Publishing in Nashville, and was working with Reba McEntire. In 2001 she released two singles as Kortney Kayle on Lyric Street Records.

She was later released from the label and teamed up with Dave in 2006 to form The Wilsons.They released their self-titled album in June 2010.

She is a licensed Realtor who began interior design by teaching herself through online guides and magazines as she worked toward her realtor license. Shortly after, she started an award-winning real estate team with Village Real Estate called Best Thing Ever Nashville, helping Tennesseans buy, sell, and occasionally flip, residential real estate.

She began flipping houses by renovating their own house. She found it really expensive to hire contractors and it wasn’t a major renovation so she decided to subcontract it herself and consult a contractor. This helped her and her husband save a lot of money on the renovation.

Together with her husband, who at the time was working as a waiter, loved the renovation process and then an agent friend of theirs suggested to them to buy rundown houses and flip them for profit. They took the advice and made $10,000.

Kortney is the host of HGTV’s HGTV’s Making it Home with Kortney and Kenny which she hosts alongside Kenny Brain. The show was previously known as Making it Home with Kortney and Dave while she co-hosted with her now ex-husband Dave Wilson. Prior to that, they co-hostedMasters of Flip, which premiered in 2015 and ran for four seasons on HGTV Canada, but only season one and two were shown on HGTV US.

The couple joined the reality show world by hosting Meet the Wilsons on CMT, which spun off into The Wilsons Flip Out, where they balanced family with house flipping. They later hosted a two seasons Saturday morning talk show, Kortney and Dave: By Request.

Kortney and Kenny Brian co-host HGTV’s Making It Home With Kortney and Brain. The show was previously hosted by Kortney and her now ex-husband, Dave Wilson. Brain was the show’s contractor. In the show, Kortney uses her extensive flipping and real estate expertise to turn fixer-uppers into dream homes – all while making smart choices with these families’ biggest assets.

“With keys and budget in hand, Kortney and her new contractor partner, Kenny Brain (Big Brother Canada), will transform each unloved home into a show-stopper. They will gather inspiration and intel from homeowners before taking the reins on the full renovation – making it bright, making it beautiful, making it home!”