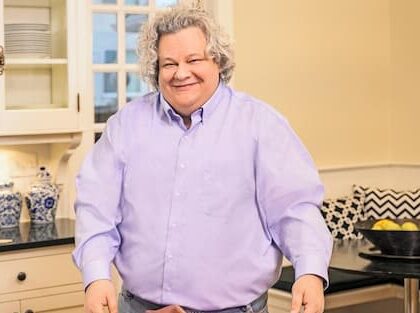 Patric Richardson is a fashion pro and textile expert and television personality. He is the host of HGTV’s “The Laundry Guy.” He is also the owner of Mona Williams and runs a summer program known as Laundry Camp.

He is also an author who has written a book about his passion for cleaning clothes named Laundry Love. He also wrote ‘The Meaning of Dress’, a case study for a college textbook. He is the owner and founder of The Laundry Evangelist which sells several laundry products in America.

He attended the University of Kentucky graduating with a degree in fashion merchandising, apparel and textiles.

Patric is in a relationship with Ross Raihala, who is a Pioneer Press music critic and an entertainment reporter. The couple first met in 2005 and soon they began dating.  Raihala has been the pop music critic at Twin Cities Pioneer Press for more than 16 years. He graduated from Cloquet Senior High School and later attended Minnesota State University in Moorhead where he studied journalism, mass communication, and public relations.

Patric is not married but he has been in a relationship with his partner, Ross Raihala since 2005.

Richardson is the owner of Mona Williams, a vintage boutique in the Mall of America. The store sells luxury vintage clothing items and accessories.

While at the University of Kentucky he worked as McAlpin’s and then transitioned to Embrys, the finest furrier in the South. He later worked at Neiman Marcus and Nordstrom, where he sold beautiful clothes in exceptional environments, worked with high-fashion leaders, and learned the significance of the runway. These opportunities gave life to his Mall of America store and destination, Mona Williams.

Patric runs a Laundry Camp, a summer program where he teaches lessons f laundry do’s and don’ts. He offers specific tips and tricks for how to remove tough stains, fold fitted sheets, and much more.

“With camp, you learn everything you need to know about your laundry. You’re going to learn how to sort it, how to wash it, how to dry it, how to put it away, and the stain removal. And stain removal always goes at the end because it’s what everybody wants, otherwise they’d just leave.”

Patric revealed in an interview with Pioneer Press that he was inspired to start Laundry Camp as people were interested in his laundry method. He has a luxury vintage store and he always carries laundry product so people could care for the vintage.

“When I opened the store, what happened was, because I carry designer vintage, I carried a little bit of laundry product so people could care for the vintage and everybody got very interested in my laundry methods. Because I would explain how to care for something. They wanted to know more. And that’s why I started Laundry Camp. And once I started Laundry Camp, people kept coming. And coming.”

Richardson is the host of HGTV’s Laundry Guy. In the show, he offers expert laundry advice and saves treasured items that come with heartwarming stories.

He revealed that his passion for laundry stemmed from his childhood. “When I was about 2-1/2 years old, I would hand clothespins to my Granny when she would put clothes on the clothesline, so I loved laundry then.”

He said that he would never question what his life’s purpose was when it comes to laundry because in the show, “there’s a woman who has a dress that her mother made—it was a party dress and she made it so that she could wear it to get married in but could continue to wear it,” he recalls to HGTV, while trying not to choke up in the process.

Her mother died when she was 6. So this dress was stained—first of all, you have to know that this woman’s workmanship was next level; couture level—and it was stained all down the front. And she said, ‘I don’t think you’re going to get it clean but I think you might get it better. I just want to know that I can preserve it.’ She was so earnest. She didn’t believe I was going to get it clean. I knew I was going to, but she didn’t believe it. And getting to reveal that to her is one of the top 10 experiences of my life. I just wanted it so bad, because how basic is that request: wanting to be able to remember your mother. I mean, I already loved laundry, but getting to do that was … that will go down as one of the highlights of my life.”