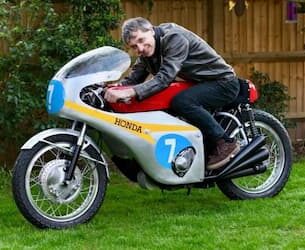 Allen Millyard is a nuclear engineer and rocket scientist who makes motorcycles, and mountain bikes. He is also a television personality who appears as a restorer on Find it Fix it Flog it & The Motorbike show

He is married to Tracey and they have two grown-up sons.

Allen is a  nuclear engineer and literal rocket surgeon from Berkshire, United Kingdom,

Allen has produced dozens of Kawasaki fours, fives, little Honda V-twins, V8 and V12 Kawasakis, the Viper V10, the Flying Millyard five-litre V-twin and the six-cylinder RC374 ‘Hailwood Tribute’ inspired by Guy Martin’s replicas of the 297cc Honda racer. He was able to craft the RC374 from scratch in his workshop, taking seven months to complete it in time for April 2018’s Stafford show where it was fired up for the first time.

His most ambitious project to date is his Viper V10 which 90% of he handmade himself at his home garage and the machine is fully road legal.

Millyard has a YouTube channel where he gives details of motorcycles he has made, road rides and maintenance and especially an in-depth look into how he make some of my engines.

Allen appears on Henry Cole’s show The Motorbike Show on ITV 4 where together with Sam Lovegrove they help transform bikes which need restoration. According to Henry’s website;

“Each series features a restoration project, starting with a bike in need of some TLC, which will be transformed, with a little help from Henry’s mechanically-minded pals Sam Lovegrove and Allen Millyard. Viewers also get an insight into the many amazing specialists who take on the chrome-plating, sandblasting and spray painting.

For the adventurous, Henry rides out on some of his favourite roads, both in the UK and further afield, taking the opportunity to test different bits of machinery in different environments whilst imploring the viewer to get off their sofa and explore the great outdoors at the weekend.”

Allen Millyard Find It, Fix It, Flog It

He also appears on Find It, Fix It, Flog It where he helps restore bikes. In the show, Henry and Sam scour the nation’s sheds, barns and basements in their quest to uncover automotive oddities that can be pressed back into service. The automotives are then restored and are used by Henry and Sam to “compete in some of the craziest vehicular challenges on their bucket lists.”