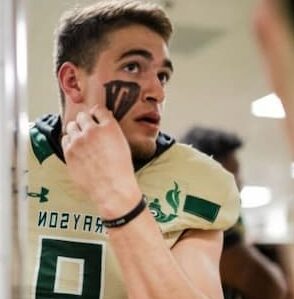 Jake Garcia is a football player playing as a college quarterback for The Miami Hurricanes- University of Miami football team. He is also a cast member of Netflix’s eight-part reality series ‘Titletown High’.

He is the son of Randy and Yvonne. According to the Atlanta Journal-Constitution Garcia’s parents dissolved their marriage to meet the GHSA’s eligibility rules. Garcia’s father, Randy, told ESPN’s Mark Schlabach that he and his wife, Yvonne, planned to reunite after their son’s senior season. Randy Garcia is retired, which allowed him to move, while Yvonne Garcia still lives and works in California, according to Schlabach’s story.

Garcia attended La Habra High in Orange County and Narbonne High in Harbor City before migrating to Georgia when California elected to suspend the fall playing season due to covid-19.

During the 2019 season at Harbor City (Calif.) Narbonne High School, he completed 70 percent of his passes. He finished the campaign with 2,301 yards and 25 touchdowns in just nine games according to the Orange County Register. As a sophomore, he completed a gaudy 75 percent of his attempts at Narbonne.

In August 2020, Jake who was a four-star quarterback committed to Southern California announced that he was transferring to Valdosta to play for coach Rush Propst. He planned to play his senior season at La Habra High in Orange County near Los Angeles, but California’s high school association announced in July that it was pushing football season into winter.

In September 2020, The Georgia High School Association began investigating his eligibility after he transferred from a California high school and started the Wildcats’ opening victory Sept. 4 over Warner Robins. He only played that one game as he was ruled ineligible

According to ESPN’s Mark Schlabach, Garcia’s parents dissolved their marriage to meet the GHSA’s eligibility rules. GHSA bylaws require that transfer students move “simultaneously with the entire parental unit” into their new school zones to be eligible immediately.

Jake is a cast of Netflix’s eight-part reality series ‘Titletown High’ which examines high school team – the Wildcats. The show follows the athletes navigate rivalries, relationships, and school while trying to clinch the state championship.

Jake was a transfer and quarterback for the Wildcats and played only in one game. At the first Wildcats game, Jake led the team to a 28-25 victory. The game was also his last as he was deemed ineligible by the Georgia High School Association.

He is a freshman collegiate football player at Miami University.