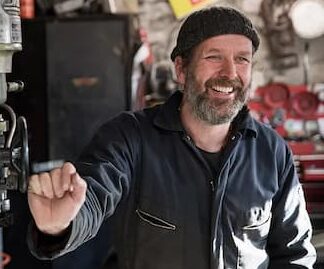 Sam Lovegrove is a motorcycle engineer who operates from Redruth in Cornwall. He is also a television personality who appears on several reality series alongside Henry Cole such as  ‘Find It, Fix It, Drive It’, ‘Shed and Buried’, among others.

He has not revealed his age.

Sam has managed to keep his private life out of the public. It is not clear whether he is married or not.

Sam and Henry Cole are friends who have worked together on several shows. The two met in 2013 during the filming of The Motorbike Show. Henry was enticed to try his hand at a motorcycle land speed record on the famous Bonneville Salt Flats in Utah. Sam was part of the bike building team. Their joint success in setting a world land speed record for a pre-1955 750cc motorcycle on a Brough Superior, cemented a friendship. They have gone to have several TV show together.

Sam appears on ‘Shed and Buried’ as a motorcycle restorer alongside presenter Henry Cole. The show follows them as they travel to find neglected motoring gems on two, three and four wheels, as well as automotive memorabilia, which they hope to fix up and sell for a tidy profit.

Sam appears on The Motorbike Show as a restorer alongside Allen Millyard. The show is presented by Henry Cole.  The show focuses on the restoration of classic bikes and also about breaking land speed records on the restored bikes sometimes.

Sam Lovegrove Find It, Fix It, Drive It

Lovegrove and Henry Cole appear on Channel’s 4 restoration series, ‘Find It, Fix It, Drive It’ where they travel around the country in order to locate, buy and restore vintage vehicles. Once the vehicle is restored they attempt to use it in the way it was originally designed to be used for.

According to Henry’s website after buying and fixing they are set out on a mission to ride, drive and compete in some of the craziest vehicular challenges on their bucket lists.

“In each episode, Henry & Sam scour the nation’s sheds, barns and basements in their quest to uncover automotive oddities that can be pressed back into service. Then the pressure is on to get them restored in time for the main event; Sam needs to use all his mechanical ingenuity while Henry calls in favours from other expert engineers he’s met on his travels.

The climax of each show is the first outing of the freshly fixed vehicle, testing the capabilities of both design and driver. These endeavors include a ploughing championship on a vintage tractor, recreating an iconic 1970s motorbike for the UK’s biggest custom show and tackling the banking at Brooklands in a pre-war boat-tailed race car.”

Sam and Henry appear on ITV 4’S Junk & Disorderly where they visit the biggest classic motorcycle auction and autojumble in the UK. In the show they buy other people’s automotive junks and classic collectibles, restore then before selling them at a profit.

Lovegrove in collaboration with Guy Willison designed and built the Gladstone Red Beard which holds a British land speed record for a vintage 350cc.