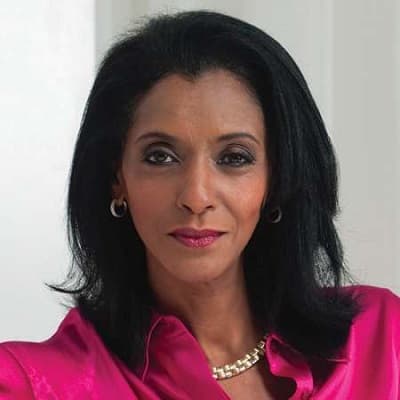 Zeinab Badawi is a Sudanese-British media personality working as an anchor for BBC and currently serves as the presenter of Global Questions and Hard Talk for the BBC. She previously served as a presenter of the ITV Morning News and co-presented Channel 4 News with Jon Snow.

Badawi attended Hornsey High School for Girls in North London, before studying Philosophy, Politics, and Economics (PPE) at St Hilda’s College, Oxford where she was a member of the Oxford University Broadcasting Society. She also earned an MA degree in Politics and Anthropology of the Middle East, graduating with distinction in 1989 at the School of Oriental and African Studies (SOAS), University of London.

Zeinab is the daughter of Mohammed-Khair El-Badawi. He worked as an editor in a newspaper in Sudan and was a committed social reformer who was involved in pre-independence politics in Sudan. When Zeinab was two, her family moved to the United Kingdom where her father joined the BBC’s Arabic Service. Her great-grandfather Babikir Bedri, was the pioneer of education for girls and women in Sudan. Today the family still run Al Ahfad University – an all-women’s university in the capital, which educates females from all parts of Sudan and the rest of Africa. In an interview, Badawi revealed that most of the members of her family were educated,

“When I was growing up it was not uncommon for me to meet aunts and great-aunts who had PhD’s from some of the world’s top universities. My grandmother – who would be more than a hundred years old today – could read and write. So I have never understood why anyone would object to female education on any grounds.”

She was brought up alongside her five siblings but not much is known about them.

Zeinab was previously married but later divorced. She has kept her personal life off the public eye and the identity of her ex-husband is not revealed. Reasons for their divorce are not also known.

Badawi has four kids, two sons and two daughters but their identity is not revealed.

History of Africa With Zeinab Badawi

In 2017, Badawi hosted a nine-part series, The History of Africa, based on UNESCO’s General History of Africa. The documentary series was broadcast in July and August 2017 on BBC World News.

Zeinab joined the BBC in 1998 as presenter and reporter for Westminster live political programmes for five years. She also worked on BBC radio as a regular presenter of The World Tonight on Radio 4 and BBC World Service’s Newshour. In 2005, Badawi became the new presenter of The World on BBC Four, the UK’s first daily news bulletin devoted principally to international news. In May 2007 the programme was rebranded as World News Today and is also shown on the BBC World News channel.

She is a regular presenter of the BBC interview programme HARDtalk. In an exclusive interview in May 2009, Badawi interviewed Sudan’s President Omar Al-Bashir, the first serving head of state to be charged with war crimes. Since 2010, in addition to her presenting role on BBC World News, she has presented on the BBC News Channel and the BBC News at Five. In May 2014 she was based in Johannesburg, presenting coverage of the South African elections on BBC World News and BBC News Channel.

Prior to joining BBC News, Badawi previously worked at Yorkshire TV in Leeds. Here she worked on the local news programme Calendar and researched, reported and presented a 20-part series on Economics fo Channel 4 TV, called ‘ A Question of Economics’. She was also involved in a four-part tv documentary series on global food insecurity. She also worked for ITN – the IndependentTelevision News Network in London, where she worked for several years as a co-presenter on Channel 4 News. After that Zeinab moved to programmes on British politics – based at Westminster. She presented live political programmes interviewing Members of Parliament as well as reporting live from the political party conferences in the UK.

Badawi has won several awards. In November 2009, she was conferred with the title of ‘International TV Personality of the Year’ in the Annual Media Awards—the international media excellence awards organized by the Association for International Broadcasting’.
In July 2011, she received an honorary Doctorate of Letters’ from the School of Oriental and African Studies (SOAS) in recognition of her achievements in journalism and In August 2018, she was awarded the President’s Medal of the British Academy “for her contributions to international political journalism”.

Badawi is the founder and chair of the Africa Medical Partnership Fund (AfriMed), a charity that aims to help local medical professionals in Africa and she is also a patron of the BBC World Service Trust – the charitable arm of the BBC. Badawi has been an adviser to the Foreign Policy Centre and a Council Member of the Overseas Development Institute. She has also been Chair of the Royal African Society (RAS) since 2014 and she is a trustee of the National Portrait Gallery since 2004 and the British Council. In June 2011, she was appointed to the advisory board of the New College of the Humanities.

She earns an annual salary ranging between $42k – $46k according to BBC anchors and reporters salaries.

She has an estimated net worth of $1.9 million.