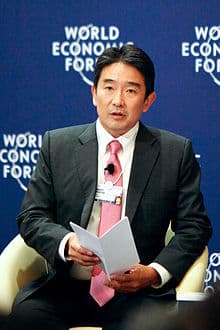 Martin Soong is an American media personality serving as an anchor for CNBC and based in Singapore. He co-anchors CNBC Asia’s Street Signs and previously worked forThe Business Times in Singapore as a reporter and also worked for Singapore Broadcasting Corporation as a producer/anchor as well as a correspondent for The Straits Times.

Soong was born in 1959 in Hong Kong but his exact date and month are not known.

No information regarding his education background is available.

Soong is a fifth-generation Hawaiian Chinese. His father, a journalist, foundered the Asia Magazine in the 1950s and his mother was born in China. No further information regarding his parents is available.

Martin was brought up alongside his three brothers and a sister but not much is known about them.

Soong is married but he has kept his wife’s details off the public eye. On 11 November 2017, he tweeted, “Kissed sleeping wife goodbye, cab on the way. #TeamCNBC pro-MNL, anchor-leg #TrumpAsiaTour. #OnTheRoad #OhDarkHundred@CNBCi. He has also not revealed when and where he walked down the aisle.

Soong serves as a CNBC business presenter based in Singapore and serves as a co-anchor with Oriel Morrison on CNBC Asia’s Street Signs. Before that, he was previously a longtime co-anchor of CNBC’s trademark morning program, Asia Squawk Box. Soong was part of the team that launched Asia Business News in 1993 (prior to the channel’s merger with CNBC in 1997). During his distinguished tenure, Martin has anchored almost all of CNBC’s flagship business shows, he left CNBC in 2004 to join CNN in their Hong Kong office before returning to CNBC the following year (2005). Soong has dominated business television in Asia for more than two decades. He covered the Asian financial crisis, and has also reported widely, from APEC and ASEAN summits, to post-conflict zones like East Timor.

Prior to joining CNBC, he previously worked for The Business Times in Singapore as a reporter, and then he worked for Singapore Broadcasting Corporation as a producer/anchor and The Straits Times as a correspondent. Soong has covered many major stories from across Asia and interviewed many key political leaders and CEOs.

Soong has won many awards, including the Best News and Current Affairs Presenter Award at the Asian Television Awards 7 times, including 1996, 1998 and 2009, and Silver World Medal for Best News Anchor in the 1997 New York Festivals of International Television Programming and Promotion.

His annual salary is unknown.

His estimated net worth is not available.