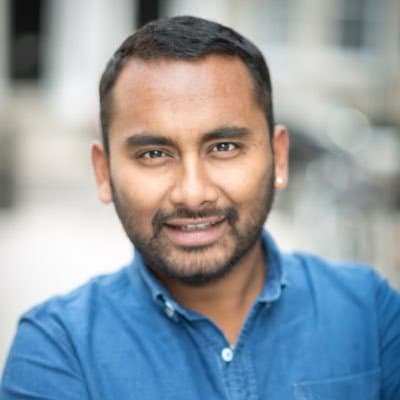 Amol Rajan is an Indian-born British media personality serving as the BBC’s Media Editor. He occasionally presents The One Show and previously served as an editor for The Independent newspaper and was also the secondary presenter and a researcher on The Wright Stuff, the daytime talk show on the Five network as well as a columnist for the Evening Standard.

Amol attended Graveney School and later studied for an English degree at Downing College, Cambridge, where he contributed to Varsity and was also an editor of the student newspaper for a term in 2005.

Rajan is the son of P. Varadarajan who is Tamil from Kumbakonam. His mother was from Pune and due to Tamil naming customs, Rajan was born V. Amol, with the V. for his father’s given name of Varadarajan. This name was modified to Amol Varadarajan when he came to England, and the family later changed their surname to Rajan. Amol was born in Calcutta, India, and when he was three when his family moved to England and was raised in Tooting, South West London. On June 21, 2020, he posted a photo of himself alongside his dad on his Twitter account with a caption,

“Happy Father’s Day to my ultimate hero, the cleverest man I’ve met, born into unconscionable poverty, who with his glorious wife (also one of 11 siblings) sacrificed everything to come to the UK when I was 3, so that his kids may at least live a fuller, happier life than he did Jun 21, 2020.”

Rajan is married to Charlotte Faircloth an Associate Professor of Social Science at the UCL Social Research Institute. She completed her Ph.D. at the Department of Social Anthropology at the University of Cambridge, looking at women’s experiences of attachment parenting and ‘full-term’ breastfeeding in London and Paris. She was Mildred Blaxter post-doctoral research fellow with the Foundation for the Sociology of Health and Illness, based in the School of Social Policy, Sociology and Social Research at the University of Kent. She is the author of the book Militant Lactivism? Intensive Motherhood and Attachment Parenting in the UK and France, published by Berghahn Books. Amol and Charlotte exchanged their marriage vows in 2013 in Guildhall Place, Cambridge, United Kingdom.

Amol and his wife have two children together, a son and a daughter but their names aren’t revealed.

Amol wears an earring and according to a tweet dated December 13, 2017, he revealed that he bought it for £1.39 in Claire’s Accessories.

“Appallingly shabby journalism from@PrivateEyeNews, who didn’t ring me to check.
1/ I didn’t apply for Director of News+Current Affairs, as I’ve told every single one of the 30+ people who asked.
2/ I wear one ear stud and from memory, it was £1.39 in Claire’s Accessories.”

Amol is a regular guest on the Great British Menu and MasterChef. The food-lover has helped John Torode and Gregg Wallace judge different dishes on popular BBC cooking show MasterChef.

Rajan was appointed as the BBC’s first Media Editor in November 2016, and he assumed his new post on 12 December. He has also hosted The Big Debate on the BBC Asian Network. From May 2017, he has presented The Media Show on BBC Radio 4 in succession to Steve Hewlett and has provided holiday cover for several presenters on BBC Radio 2, including Simon Mayo, Jeremy Vine and Zoe Ball. Rajan has occasionally presented The One Show.

Prior to joining BBC, Amol previously served as the secondary presenter on The Wright Stuff, the daytime talk show on the Five network, during its 2006–7 series. He was also a researcher on the programme. He also worked for The Independent newspaper as a news reporter, sports correspondent, columnist, comment editor, and editor of Independent Voices. He has also written a Monday column for the London Evening Standard, restaurant criticism for The Independent on Sunday, and has contributed to The Salisbury Review.

Rajan has authored several books including, The Authors XI: A Season of English Cricket from Hackney to Hambledon and Twirlymen: The Unlikely History of Cricket’s Greatest Spin Bowlers, published in 2011.