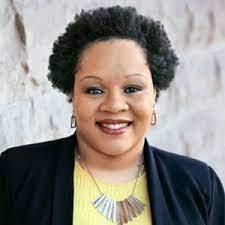 Yamiche Alcindor is a journalist who is the host of Washington Week, a White House correspondent for the PBS NewsHour, and a political contributor to NBC News and MSNBC.

In the past, she has worked as a reporter for USA Today and The New York Times. Alcindor writes mainly about politics and social issues.

Yamiche is 35 years old as of 2021, she was born on 1 November 1986, Miami, Florida, United States. She celebrates her birthday on November 1 every year.

Yamiche stands at an estimated height of 5 feet 7 inches. Her weight and other body measurements will be listed once they are out.

Yamiche was born and brought up by her parents in Florida, United States. When she was in high school, she was an intern at the Westside Gazette, a local African-American newspaper, and the Miami Herald.

Yamiche earned a bachelor’s degree in English and government with a minor in African-American studies at Georgetown University in 2009. While studying, she became a member of the predominantly African-American sorority Alpha Kappa Alpha.

In 2015, Yamuche received a master’s degree in “broadcast news and documentary filmmaking” at New York University.

Yamiche was born in Miami, Florida, to Haitian-born parents. Her father hails from Plaisance, and her mother is from Saint-Louis-du-Nord. Yamiche’s parents were both immigrants from Haiti. Her parents’ identities are unknown to the public since she has managed to keep a low profile. It is also not known whether she has siblings.

Yamiche is married to her lovely husband Nathaniel Cline. The couple tied the knot in 2018.

Yamiche and Nathaniel exchanged their vows on March 6, 2018, in Virginia, United States.

Unplugging to celebrate my marriage to @nathanielcline

Yamiche is the host of Washington Week, White House correspondent for the PBS NewsHour, and a political contributor to NBC News and MSNBC. She has worked as a reporter for USA Today and The New York Times. Alcindor writes mainly about politics and social issues.

Yamiche’s first full-time job was as a reporter at Newsday, a newspaper based in Melville, New York. She has made contributions at NBC and MSNBC. She has appeared in programs like Morning Joe, The Rachel Maddow Show, PoliticsNation with Al Sharpton, Hardball with Chris Matthews, and Meet the Press.

In January 2018, she was named White House correspondent of the PBS NewsHour, replacing John Yang, who was named NewsHour’s national correspondent. In this position Yamiche first covered the Trump presidency.

During the 2020 presidential election season, she was one of the moderators of the sixth Democratic debate.  Yamiche received the 2020 Aldo Beckman Award for Overall Excellence in White House Coverage from the White House Correspondents’ Association.

In May 2021, Yamiche was named the new moderator of Washington Week.

According to some sources, Alcindor receives an annual salary of $129,374. Her exact salary figures will be listed once they are out.

Yamiche has not gone public with her net worth figures.