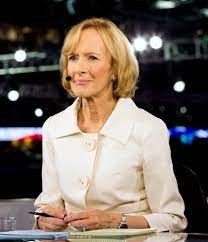 Judy Woodruff is a broadcast journalist currently serving as the anchor and managing editor of PBS NewsHour.  She has worked in network, cable, and public television news since 1976. Judy has covered every presidential election and convention since 1976. She has interviewed several heads of state and moderated U.S. presidential debates.

Judy stands at an estimated height of 5 feet 3 inches.

For her high school studies, Judy went to the Academy of Richmond County, a high school in Augusta. She later joined  Meredith College in Raleigh, North Carolina, starting in 1964. She initially pursued a degree in mathematics

She later got interested in doing politics through her political science teacher at Meredith. After two years at Meredith, she moved to Duke University in 1966. She was active in the student government of Duke and was a member of the sorority Alpha Delta Pi

While studying, Judy worked for Georgia Representative Robert Grier Stephens Jr. as an intern for two summers. She decided to enter journalism in her senior year.

Judy was born to her parents in Tulsa, Oklahoma. He is the son of William H. Woodruff, a chief warrant officer in the Army, and Anna Lee (née Payne) Woodruff. She has one sister, Anita. She grew up as an army brat, and because of that moved multiple times during her childhood.

Judy is married to her lovely husband Al Hunt. Al is a columnist and former reporter. The couple lives in Washington, D.C. with another residence in nearby Maryland.[ The duo met during a softball game between journalists and staff of the Carter presidential campaign in Plains, Georgia, in 1976.

The couple tied the knot on April 5, 1980, in St. Alban’s Episcopal Church in Washington, D.C.

Jeffrey was born with a mild case of spina bifida and became disabled and brain-damaged after surgery in 1998, which caused Judy to reduce her workload at CNN.  Lauren was adopted from Korea when she was four months old.

Judy founded the International Women’s Media Foundation, an organization that internationally supports women in the media, in 1990. She has served on its board of directors and is part of its advisory council.

Judy and her husband, Al, have actively supported families of children with spina bifida (a condition shared by their eldest son, Jeffrey) with counseling and other necessary services.

The couple helped organize the Spina Bifida Association of America’s annual roast, during which politicians roast journalists to raise funds for the association. The event, broadcast by C-SPAN, was held between 1989 and 2008.

After graduating from Duke University in 1968, Judy entered local television news in Atlanta. She was named White House correspondent for NBC News in 1976, a position she held for six years. She joined PBS in 1982, where she continued White House reports for PBS NewsHour, formerly The MacNeil/Lehrer NewsHour, in addition to presenting another program.

She is currently serving as the anchor and managing editor of PBS NewsHour.  She has worked in network, cable, and public television news since 1976.

Judy moved to CNN in 1993 from PBS to host Inside Politics and CNN WorldView together with Bernard Shaw, until he left CNN. She left CNN in 2005 and returned to PBS and NewsHour in 2006.

When the daily world affairs program CNN WorldView was launched in 1995, Judy and Shaw became the hosts. She remained co-anchor of WorldView until it went off the air in 2001.

She left CNN in June 2005 after her contract expired in order to teach, write, and work on a long-form television project.

Judy has not disclosed her salary figures to the public

Judy has an estimated net worth of $8 million which she has earned from her professional career as a journalist.