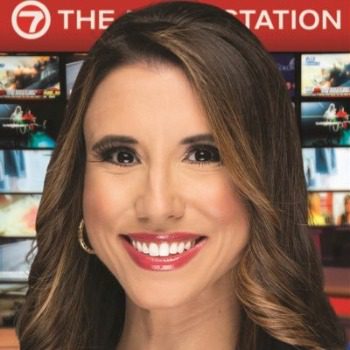 Vivian Gonzalez is an American Journalist who serves as a meteorologist at 7 News WSVN. In 2005, she began working at the station as a weather producer. Vivian is enthusiastic about education and uses it to convey complex material in an easy-to-understand manner. As part of her community service, she enjoys teaching children about science and math.

Monsignor Edward Speed High School was her alma mater. Vivian went on to Florida International University to pursue her education. She majored in Geography and minored in Mathematics and Spanish at this university. Vivian continued her education at Mississippi State University, earning a Bachelor of Science in Meteorology.

She was born in Miami, Florida, United States. However, she has not disclosed much information about her family to the public. Vivian has a twin sister named Lilian Gonzalez.

She is happily married to the love of her life Jorge Hernandez, an underwriting manager of Federated National Insurance Company based in Sunrise, Florida. The two got married on April 24, 2010.

In the midst of the most active hurricane season on record, she joined the station as a weather producer in 2005. Vivian Gonzalez, Vivian’s Meteorologist, tells you all you need to know to get your weekday mornings started. In November 2012, she was named WSVN’s Morning Meteorologist.

She is proud of her achievements, which include earning the American Meteorological Seal of Approval, a Bachelor of Science in Geosciences from Mississippi State University, and a Bachelor of Arts in Geography from Florida International University.

Vivian’s passion is education, and she employs all of her skills to convey complicated information in an easy-to-understand manner.

In the midst of the most active hurricane season on record, Vivian joined 7News as a Weather Producer in 2005. Thirty-one systems formed that year, with Wilma and Katrina directly affecting South Florida. Her education in geography came in in when it came to keeping track of everything Mother Nature tossed our way.

She was immediately elevated to Weather Anchor for “Today In Florida” Saturday Edition in 2007 due to her hard work. Her dedication and passion for keeping you informed about South Florida’s rapidly shifting weather patterns distinguishes her as a valuable team member.

Vivian is a proud member of the American Meteorological Society and the National Weather Association.
Vivian is a Miami native who is well-versed in the ins and outs of the region’s weather.

She appreciates being a part of the community and teaching math and science to children. Vivian engages in the Community Partnership for the Homeless and Habitat for Humanity, as well as supporting causes such as La Liga Contra El Cancer.

She enjoys spending time with her family and friends, cooking, kickboxing, watching movies, and following sports, particularly those involving her hometown teams. Weekday mornings from 5:00 a.m. to 10:00 a.m., look for her forecasts.

Details of her estimated net worth are still under review.