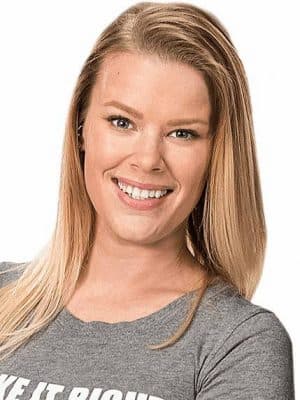 Sherry Holmes is a contractor and television personality. She is the daughter of professional contractor and TV host, Mike Holmes. She is a permanent member of her father’s Make it Right crew. She can also be seen alongside her brother Mike Jr. and dad Mike Holmes in Holmes and Holmes on DIY Network and the Canadian series Holmes 911 on CTV Life.

She is the daughter of Mike Holmes and Alexandra Lorex. Her father Mike Holmes is a Canadian TV personality and a contractor. He has appeared on Holmes on Homes, Holmes Inspection, Holmes Makes It Right, Holmes & Holmes, Holmes: Next Generation on DIY US and Holmes Family Effect on CTV. He was a full-time contractor when he was hired to do some building work on the set of a Canadian TV show that shared tips on DIY home repair.

She has two siblings; a sister known as Amanda Holmes and a brother, Mike Holmes Jr.

She is married to Blake Steed, a Canadian builder and television personality. The couple met in 2012 at the set of Holmes Inspection and got engaged on June 11, 2017.  They got married on December 12, 2018 at The Royalton St. Lucia Rooftop Terrace.

At the time of their meeting, Sherry and her team were completing and filming the rebuild of High Park’s castle playground in Toronto. As they only had two weeks to complete the construction Sherry’s team hired a framing company to help the project move quickly, Blake was one of the framers. After the project was complete Sherry’s company offered Blake a job.

“He was pretty quiet, but I remembered his name as soon as I met him. We became friends while working on different projects, eventually started dating secretly and somehow ended up moving in together before we even realized it.” Sherry recalled.

Sherry is a contractor and TV Host who appears on HGTV and CTV. At the age of 16, she began working behind-the-scenes of her father’s breakout series, Holmes on Homes®. In 2008 she traveled to New Orleans to help build a hurricane- and flood-resistant home for a victim of Hurricane Katrina, in Holmes in New Orleans.

Since then, she has been a permanent member of Mike’s Crew, first on Holmes Inspection and then on Holmes Makes It Right, and Holmes & Holmes. She co-hosted Holmes: Next Generation on DIY US and Holmes Family Effect on CTV (2021) with her father and brother Michael.

She also mentors young women through Conestoga College’s Jill of All Trades and acts as an Ambassador for Habitat for Humanity’s Annual Women Build Event, a program that calls on women to help build stronger, safer communities.

Sherry was diagnosed with brain cancer in 2002. She had suffered from Brain Tumor Symptoms; prolonged headaches, trouble with her vision, and nausea combined with vomiting. As a result, doctors performed a CT scan on her, and that is when the tumors were discovered. She was operated on and the tumors were removed. Her father, Mike Holmes was so grateful he donated a new CT Scan machine to the hospital.