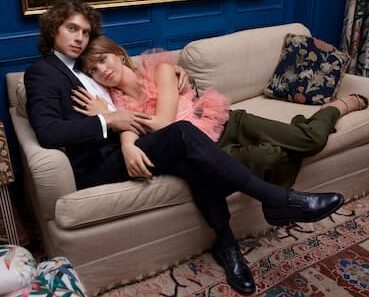 Toby Engel (Tobias Alexander Engel) is a British photographer, tech entrepreneur, and aspiring film director. He is the husband of model and artist Ivy Getty.

He is the son Cheryl Prime and Peter Engel, an Australian businessman but his parents have since divorced. His mother, Cheryl Prime is an actress who appeared on Coronation Stress as Kathy Barrett between March and September 1982. She studied at the Saturday Club for children and made her stage debut at the age of nine in a production of The Corn is Green at the Victoria Theatre.

Toby married Ivy Getty in November 2021.  Ivy wore a gown made from broken glass, designed by Maison Margiela creative director John Galliano. The wedding was officiated by Speaker of the House Nancy Pelosi at City Hall in San Francisco.

The couple first met in 2017 when they were introduced by Ivy’s cousin and a year later they met at a Paris Fashion Week event.

“I saw this cute guy who was taking photos of the event and of me. I naturally went over, and we started talking. Quickly we realized that we had met before, the year before.” Ivy told the Vogue.

“After attending the Unicef Ball, we went to Capri for three days. Normally, I pick where we go out to eat, but this time Toby insisted he pick. This didn’t raise any red flags, but when I got to the restaurant, I thought to myself ‘Oh he really planned this. We had a table overlooking the entire island away from the rest of the restaurant. The waitress came, and we ordered our food. As the sun was getting ready to set, we went outside to take photos of it. Toby set his iPhone timer and got down on one knee. The timer went off at the perfect moment as we have the most incredible photo.”

Toby proposed with a sapphire engagement ring on a yellow gold band. Diamonds from a necklace Ivy’s grandmother gave her when she was a teenager were added around the center stone.

Who Is Ivy Love Getty

Ivy is an American artist and model. She is the great-granddaughter of John Paul Getty, a petroleum industrialist who founded the Getty Oil Company in 1942. She is the granddaughter of Gordon and Ann Getty, the renowned San Francisco philanthropists. Her grandmother died in September 2020.

She is the daughter of John Gilbert Getty who was a musician and died on November 20, 2020 from complications of an accidental fentanyl overdose.

Tobias is a New York-based photographer, tech entrepreneur, and aspiring film director. Less information is known about his career as he keeps that part of his life private.

His actual net worth is under review. Some sources allege he is worth $1 million.