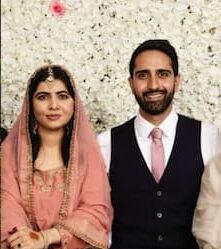 Asser Malik is an entrepreneur with a demonstrated history of working in the sports industry. He is serving as general manager high performance at the Pakistan cricket board and is the co-founder of Last Man Stands in Pakistan.

His exact age is unknown. He was born in Lahore, Punjab, Pakistan.

He attended Aitchison CollegeLahore fr his college education and later joined Lahore University of Management Sciences graduating with a BS in Economics and Political Sciences.

Asser married Malala Yousafzai in November 2021. Malala Yousafzai is a 24-year-old Nobel Peace Prize laureate. She was the youngest winner of the Nobel Peace Prize in 2014 for working to protect children from slavery, extremism and child labor. At the age of 15, she was shot in the head by a Taliban gunman while riding a school bus. She recovered and became an activist fighting against girls oppression worldwide.

Malala announced the news on her Instagram on November 9 where she posted a photo of themselves revealing they had “celebrated a small nikkah ceremony.”

In July 2021 Malala did an interview with British Vogue where she talked about her hesitancy around the institution of marriage saying she didn’t “understand why people have to get married.”

“If you want to have a person in your life, why do you have to sign marriage papers, why can’t it just be a partnership? Even until my second year of university… I just thought, ‘I’m never going to get married, never going to have kids – just going to do my work.”

She added that she had changed her perspective as she continued her education at the University of Oxford.”My mum is like, ‘Don’t you dare say anything like that! You have to get married, marriage is beautiful.’ I didn’t realize that you’re not the same person all the time. You change as well and you’re growing.”

Asser serves as general manager high performance at the Pakistan Cricket Board. He is also the founder of Last Man Stands in Pakistan, which is an amateur cricket league. He previously worked as a managing director for MLK management. He has also worked as the director of operations for Grassroots Cricket.

He worked for Multan Sultans on operations and special projects where he designed player development program. Apart from working in the sports industry, he has also worked in other areas such as Coca-Cola Beverages Pakistan Limited where she began as a management trainee but was later promoted to sales specialist. He also worked at AkzoNobel as an accountant manager.

He was also a co-founder of Desi Tour Project where he started disco tour bus to explore the real history of Pakistan. In addition, he worked with LGS Paragon as a cultural and event coordinator.