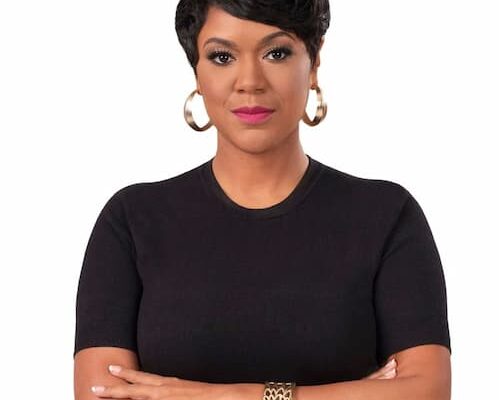 Tiffany D. Cross is a media personality serving as a political analyst, and author serving as the host of The Cross Connection on MSNBC show. She is the author of Say It Louder! and a Resident Fellow at the Harvard Kennedy School’s Institute of Politics.

She is also the Co-Founder of The Beat DC, a platform intersecting national politics, policy, business, media, and all people of color.

Where is Tiffany Cross From

Cross hails from Cleveland, Ohio but grew up in Atlanta, Georgia.

Tiffany is the daughter of Ramona Cross. She revealed on her Twitter account that she was raised by a single mother alongside her brother.

My mom’s picture wasn’t included in the opening of #CrossConnection 😩so I’m tweeting them here! I was raised by a single mother who was very young when she had my brother and I and juggled a lot of struggle to raise us. Thank you mom!🙏🏽💕@RC_keepnfaith pic.twitter.com/xNBC6ZoKKL

Her marital status is unknown. It is unknown whether she is married or not.

She attended Clark Atlanta University where she studied Mass Communications with an emphasis on radio, TV, and film.

In the Spring 2020 Cross was a resident fellow at Harvard Kennedy School’s Institute of Politics.

Cross is the author of Say It Louder: Black Voters, White Narratives, and Saving Our Democracy.

Tiffany is the host of The Cross Connection on MSNBC. She previously served as the DC Bureau Chief of BET News and the Liaison to the Obama Administration for BET Networks where she covered Capitol Hill, produced political specials, and oversaw the daily operations of the news department.

She began her career in media as an Associate Producer for CNN where she covered Capitol Hill for the network’s weekend show unit. She also previously served as a Field Producer for America’s Most Wanted and Discovery Communications.

She has also worked in campaigns having served as a senior advisor minority community organizing and partnerships at National Education Association. She later transitioned from the control room to the green room co-founding The Beat DC, a national platform intersecting politics, policy, business, media, and people of color.

Cross has a high-pitched voice.

In November 2020 Tiffany revealed that she had undergone surgery in September after having been in intense pain for months and was losing her hair. She however didn’t reveal what was ailing her.

I had to have surgery in September. I was in intense pain for months. I was losing my hair. And I didn’t have health insurance. The ONLY way I was able to get the healthcare I needed was because of #Obamacare
I understand you…because I AM you. Let’s talk about it. #CrossTalk