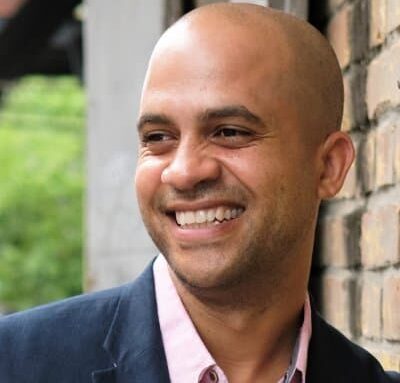 Jon Pierre Tjon-Joe Pin is an American entrepreneur, real estate agent and television personality. He is a co-host of HGTV’s Two Steps Home. He is also the co-owner of Harper Raine Homes LLC, a home design and investment company.

Pierre stands at a height of 6 feet 3 inches tall.

He is of Chinese – American descent.

Jon last name comes from his father, who is from Suriname in South America. His father is half Chinese, so their unusual, three-word last name is the Dutch spelling of a Chinese name. (It’s pronounced “Chon-You-Pin.”)

Pierre has revealed that his father is half Chinese. He has not revealed the name of his mother but he shares her photos on his social media pages.

Pierre is married to Mary Tjon-Joe-Pin since March 2009. Mary is a former flight attendant and an interior design. She is the co-owner of Harper Raine Homes LLC, a home design and investment company where she serves as the head of the design department. She is also the host of HGTV’s series Going for Sold and Two Steps Home.

TJP together with his wife have two children together; Harper, born in 2015 and Grayson Skye born in 2017.

Jon is a real estate agent who is a licensed Realtor with CB&A Realtors. He is the co-owner of Harper Raine Homes LLC, a home design and investment company. He specializes in buying and selling residential real estate and also in planning and executing custom plans for renovations and redesigns.

During an interview with Voyage Houston he said he got into real estate after he realised that working an 8-5 job was not working for him and he wanted to do things that allowed him to interact with many people. At the time he was working for his family in the oil industry.

After watching a lot of HGTV videos he decided that real estate (along with photography and basketball officiating) was the life for him.

“The officiating thing came out of a chance meeting with an insurance guy who came by our office to try and solicit business. While waiting in the front office, we struck up a conversation about sports, which led to me talking about my love for Mixed Martial Arts and the time I fought in the cage and, at that time, trained pretty consistently. He talked me into the much less violent and much more self-preserving “sport” of basketball officiating. I started doing that for the last 2 years of life in the “job” world.

When I knew the time was approaching for me to leave, I decided to go ahead and get my real estate license and received that with about 1 month left before I left my job. So with photography, a real estate license, 2 years of basketball officiating, a wife and a 5-month-old baby in my hands, I stepped out on my own! I left a very well-paying job, for the life of way less money but way more love and passion for my everyday life. I took those things, along with a commitment to all-out hard work, hustle, love and very little sleep and have been making it for the past 2.5 years. I work as a family and real estate photographer.”

Pierre together with his wife, Mary are the co-host of the HGTV series Two Steps Home and Going for Sold. Going for Sold premiered in 2019 where the couple flipped less-loved houses around Houston. The show focused solely on flipping houses while Two Steps Home which premiered in 2021 focuses more on the real-estate aspect of the flipping process.

In the show they help Houstonians navigate their home-selling-and-buying adventure by using a foolproof two-step process. First, Mary uses her interior design skills to stage the client’s home and get the house in tip-top shape for the market and Jon helps the client steer through the sometimes-tricky housing market of the Bayou City. Once the house is sold, the extra profit then goes into buying the client’s new house and renovating it to their liking.

Jon together with his wife has an accumulative net worth of $5 million.