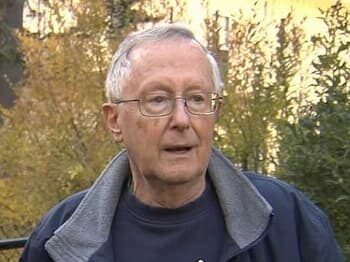 Thomas Daffron is a former lobbyist who served as COO for Jefferson Consulting Group in Washington, D.C. He is the husband of the United States Senator for Maine Susan Collins.

He has worked as a newspaper reporter. He was chief of staff for Senators Bill Cohen, Fred Thompson, Mo Udall, and Lisa Murkowski, and as a speechwriter for Chuck Percy. He has also worked for International Paper in Maine and for the Baltimore Orioles, and he has been a consultant to Senator Susan Collins. At the time of this interview, he was

He graduated from Brown University with a degree in English Literature and received a master’s in journalism from Columbia University.

He is the son of the late Katherine M. Daffron and late Thomas A. Daffron Jr., who lived in Suffern, N.Y. His father retired as an assistant news editor at The New York Times and was the managing editor of its International Edition in Paris in the 1960s. He died of heart and kidney failure in 1995 at the age of 83.

Thomas married Susan Collins in 2012. The couple met in 1974 when Collins was an intern in former Sen. Bill Cohen’s congressional office. At the time she was 21 years old. Daffron discovered her internship application in a pile forgotten in a desk drawer. Both of her parents had supported Cohen and were mayors of Caribou, which her father represented in the state Legislature. At the end of the internship, he hired her as a junior legislative aid. By age 26 she was minority staff director of the oversight committee on governmental affairs, a committee she would one day chair as a senator. He also advised her when she entered electoral politics in her early forties to win the Maines senatorial seat in 1996.

“Somebody once said that the best person to marry is your best friend. This evolved from a working relationship to a friendship when I was working on her campaigns and now to husband and wife. I’ve known her for a long time, which I think will be beneficial to us in the long run because there will be few surprises, as we know each other’s strengths and weaknesses.” Thomas said in an interview.

Daffron run Collin’s political action committee, Dirigo PAC, since it was created in 2003 but stepped down in 2012. Collin has also said that Daffron “was the driving force behind my campaign” which helped her win the senatorial seat in 1996.

Thomas was previously married to his college sweetheart Margot Cory, in 1962. The couple later divorced.

He has three children from his first marriage.

Thomas comes from a family of journalists as his father was an editor at The New York Times. He enrolled at Columbia Journalism School and went on to report for the Miami Herald and write editorials for the Wilmington News-Journal. In 1969 he won the American Political Science Association fellowship, which placed young journalists and academics on short-term assignments on Capitol Hill. He served with both a liberal Democrat, Rep. Mo Udall of Arizona, and a moderate Republican, Sen. Charles Percy of Illinois.

After the stint, he was offered a job by Percy. In 1973 he accepted a job with Cohen who had been elected as a congressman from Maine. He remained with him off and on for nearly two decades as chief of staff.  He had left Cohen’s office twice; once briefly to work for International Paper in Augusta in 1988, and again in 1990 to become senior vice president of the Baltimore Orioles, he stayed until 1993 when his boss, Eli Jacobs, sold the team.

He later became the chief of staff to Sen. Fred Thompson, R-Tennessee. After four years working with Sen. Thompson, he was hired as the manager of Elizabeth Dole’s 1999 presidential campaign.

Daffron is a registered lobbyist who has been a senior executive at two D.C-area political consultancies with lobbying arms. He was executive vice president of Chesapeake Enterprises from 2001 to 2004, and registered as a lobbyist for Monster.com and other companies. He also worked with American Defense International, where he represented several companies seeking Pentagon and Homeland Security contracts.

He also served as a chief operating officer at Jefferson Consulting Group, he registered in 2006 as a lobbyist for Unisys and in 2007 for database giant LexisNexis. Despite being registered as a lobbyist he says he has done very little lobbying. While at Jefferson’s he oversaw the administrative and financial functions as well as the day-to-day operations of the firm.