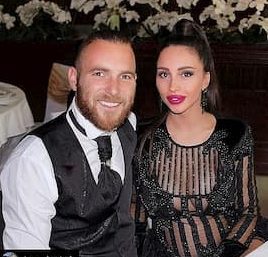 Tea Katai is a Serbian homemaker and the wife of LA Galaxy’s Serbian Footballer Aleksander Katai. On June 4, 2020 she posted on Instagram condemning protestors following the death of George Floyd. On one post she captioned  “Kill the s—s!” while the second post she showed a picture of an individual carrying boxes of Nikes with the caption “Black Nikes Matter.”

She belongs to while ethnicity.

She is married to Aleksandar Katai a Serbian professional footballer. He is a free agent after he was released by LA Galaxy after his wife posted a controversial message on her Instagram.

He plays as an attacking midfielder and a winger. He began his career playing for clubs like FK Vojvodina youth squad and Olympiacos Football Club.

He began his professional career in 2014 playing for Red Star Belgrade. On August 31, 2016 he signed a three-year contract with La Liga side Deportivo Alavés. He was loaned to Chicago Fire of Major League Soccer on February 6, 2018. He was later acquired by the club on a permanent basis. The deal has Katai signed through the 2019 season with a club option for 2020.

He joined the LA Galaxy after leaving Chicago Fire on December 31, 2019, through the use of Targeted Allocation Money.

She has one child although the name is unknown.

On June 4, 2020 Tea posted twice on Instagram, the first post showed a police SUV attempting to drive through protesters in New York. A caption in Serbian read, “Kill the s—s!” while a second post showed a picture of an individual carrying boxes of Nikes with the caption “Black Nikes Matter.”

Aleksandar released a statement on Instagram saying he does not share the views of his wife and are not tolerated in his family and that it was a mistake and they take full responsibility.

Aleksandar Katai Has Been released by L.A. Galaxy

After Tea’s post the L.A. Galaxy released a statement saying they “strongly condemned the social posts and requested their immediate removal.”

“Earlier today, the L.A. Galaxy were made aware of a series of racist and violent social media posts … The L.A. Galaxy strongly condemned the social posts and requested their immediate removal.”

A statement from the LA Galaxy on Tea Katai. pic.twitter.com/tfGDMUomIo

The LA Galaxy have parted ways with Aleksandar Katai. pic.twitter.com/mcu0fTreC8