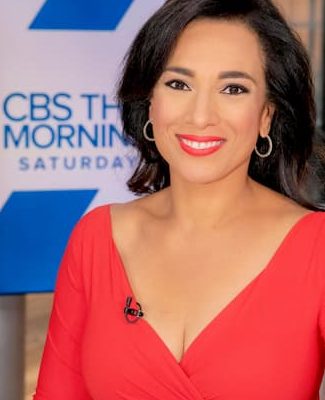 Michelle Miller is an American journalist serving as a co-host of “CBS This Morning: Saturday” and a national correspondent for CBS News. She also regularly appears on the “CBS Evening News,” “CBS This Morning” and “CBS Sunday Morning.”

She was born on December 8, 1967 in Los Angeles, California, United States.

Miller stands at a height of 5 feet 3 inches tall.

Michelle belongs to a mixed-race as her father was black and her mother is white. On June 5, 2020 on CBS News she said, “Born into the unrest of the late 1960s, I was raised in South Central Los Angeles, the product of an interracial union that my father celebrated and my mother, to this day, does not acknowledge.”

She has a bachelor’s degree in journalism from Howard University and studied abroad in Kenya and Tanzania. She also holds a master’s degree in urban studies from the University of New Orleans.

Dr. Ross M. Miller Jr. was a surgeon and civic leader who died in 196 at the age of 68. He was president of the Compton-Los Angeles County Civic Center Authority that oversaw the creation of the combined county and city court, library and administration complex and Martin Luther King Jr. Plaza in Compton.

In 1967 he ran for Compton City Council on a militant clean-up-City Hall theme that brought African Americans to majority control of the council for the first time. Years later he was elected to Compton’s “Promenade of Prominence,” with a star in Martin Luther King Jr. Plaza, for his contributions to the city.

As a trauma surgeon, he battled to save the life of Senator Robert F. Kennedy who was shot in the kitchen of the Ambassador Hotel in Los Angeles after he claimed victory in the California Democratic primary for president on June 5, 1968.

In 1999 she got married to Marc Morial who is an American political and civic leader and the current president of the National Urban League. He became the youngest mayor in 50 years and one of the youngest mayors ever of a major American city when he was elected New Orleans Mayor in 1994.

She began her career in journalism as an intern at Nightline and the Minneapolis Star Tribune. she wrote for the South Bay and Valley editions of the Los Angeles Times from 1989 to 1990. She later joined Orange County Newschannel in Santa Ana, California as an Assignment Editor, Producer and Reporter from 1990 to 1993. In 1993 she joined WIS-TV in Columbia, South Carolina as a reporter and Weekend Morning anchor.

She joined WWL-TV, the CBS affiliate in 1994 where she worked as a reporter and anchor until 2003. Her segment, “The Early Edition” was the highest-rated newscast in its time slot across the Nation.

She joined CBS News in 2004 and currently serves as a co-host of “CBS This Morning: Saturday” since July 2018. She regularly appears on the “CBS Evening News,” “CBS This Morning” and “CBS Sunday Morning.” She has also appeared as a correspondent on “48 Hours.”

She has reported on stories such as the unrest in Ferguson, Missouri, following the shooting death of Michael Brown; Sandy Hook Elementary School shooting in Newtown, Conn.; the shooting at Chardon High School in Ohio; the 2004, 2008 and 2012 presidential elections; the death of Whitney Houston; the 100th anniversary of the Titanic’s sinking; medical care for the rural poor in South Africa, and Hurricanes Sandy, Irene and Katrina.

What Nationality Is Michelle Miller? American

Who is Michelle Miller Married To? Marc Morial

What is Michelle Miller Worth? under review