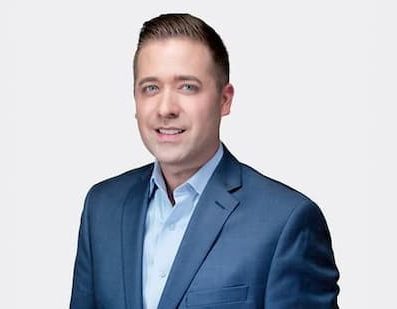 Kyle Clark is an Emmy-Award winning American journalist serving as an anchor and an investigative reporter for KUSA’s 9News in Denver, Colorado. He hosts “Next with Kyle Clark” and 9NEWS at 9 p.m. and 10 p.m.

Kyle stands at a height of 5 ft 11 inches tall.

He attended Lyons High School and later joined Ithaca College graduating with a Bachelor’s Degree of Arts in Journalism.

He was born and raised in Lyons, New York. His mother was a music teacher while his father was an elementary school principal.

Home for the holidays, found this photo of me at 10 months, same age as my daughter. I see my parents today as they were here. I wonder if my daughter will see me the same 35 years from now.

Clark married his wife Vanessa Clark in 2010 director of marketing and PR at Goodwill Industries. During an interview with Biz Journal he said that the two met when they were young.

He has a daughter born in February 2018 although her name is unknown.

Clark began his career in journalism as a weekend anchor and reporter at WBNG-TV in Binghamton, New York while studying at Ithaca College. He later joined 13WHAM-TV in Rochester, New York as a reporter and anchor. At the age of 15 he had a job covering local news and high school sports for WACK-AM, a rural radio station.

He joined 9 News in Denver, Colorado in 2007 where he serves as an anchor and investigative reporter. He hosts “Next with Kyle Clark” and 9NEWS at 9 p.m. and 10 p.m. He contributes reports to 9NEWS’ political coverage, the 9Wants to Know investigative unit, and 9NEWS Storytellers.

Some of his coverage includes; his 2019 reporting from Boulder where the near-hurricane force winds pushing a fast-moving wildfire out of the foothills knocked him off his feet while on air. This earned him a regional Emmy and Edward R. Murrow awards.

In 2012 he reported about the High Park Fire, reporting for days from an overlook above the Poudre River where firefighters were fighting to keep the fire south of the river. He also anchored 17 consecutive hours of coverage on the day of the Aurora theater shooting in July 2012.

As an investigative reporter, he exposed a law in Colorado law that forced prosecutors to use an antiquated eavesdropping law to prosecute video peepers. His reporting on a family that was spied on in a local motel led state legislators to change the law.

Another of Clark’s investigations revealed a judicial system error that caused hundreds of criminal warrants to be thrown out, ruining the best chance to catch an illegal immigrant who repeatedly drove drunk and eventually killed a grandmother in Denver. Prosecutors then changed the practice that led to the error.

Kyle is the host of ‘Next with Kyle’ weeknights at 6 on 9NEWS. He also serves as the show’s managing editor alongside Linda Kotsaftis, KUSA’s head of news content.

According to a tweet from August 2016 Kyle is unaffiliated.

Not sure how declaring I’m unaffiliated (no party registration) would change your view that I’m biased. #copolitics https://t.co/EAybv0fGsw

One can reach Clark through his email; kyle.clark@9news.com

What am I doing on my first vacation day since February? What else did you think I’d be doing?