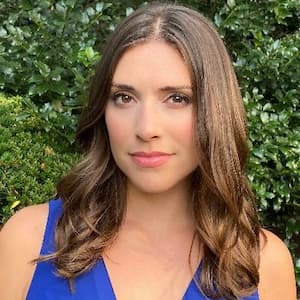 Tara Palmeri is an American media personality serving as a co-author of the Politico Playbook, investigative reporter and host of Sony podcasts “Power: The Maxwells” & “Broken: Seeking Justice.”

She holds a Bachelor of Arts degree in Communications from the American University.

Tara is the daughter of Peter Palmeri and Yolando Palmeri.

Palmeri is a former White House correspondent for ABC News, where she covered the most important political stories for flagship programs like Good Morning America and World News Tonight.

During her tenure, she broke many exclusive stories on foreign policy. She was first to report that the last living Nazi in the US was deported to Germany; that President Trump had approved the sale of anti-tank missiles to Ukraine; that an executive order was drafted to remove the US from NAFTA; and that Trump ordered a plan to remove all US diplomats from Turkey for the return of Pastor Brunson.

Tara served as White House Correspondent for POLITICO from December 2016 to October 2017. Before joining POLITICO’s D.C. political team, she reported for POLITICO’s European edition where she covered the Paris and Brussels terror attacks, the Greek financial crisis and the British referendum. At the time, she was a CNBC contributor where she provided commentary on-air. She also worked as a CNN political analyst.

Prior to joining POLITICO Europe, she reported on New York City politics for the New York Post. She started at the newspaper in 2010 as a reporter for Page Six. During President Obama’s first term, she co-authored the Washington Examiner’s “Yeas & Nays” column on people, power and politics in the U.S. capital.

She began her career in journalism as a broadcast intern for Voice of America in 2008. After graduating she was hired by CNN to assist live production.

According to an article published by The Vanity Fair, TJ Ducklo, the White House deputy press secretary, allegedly threatened Tara telling her “I will destroy you” and accused her of being motivated by romantic spite when she was assigned to write about a relationship he began with Alexi McCammond,  an Axios reporter covering the Biden campaign and transition.

He allegedly told Tara he would ruin her reputation if Politico ran a piece about his relationship with Alexi.

During the off-the-record call, Ducklo made derogatory and misogynistic comments, accusing Palmeri of only reporting on his relationship because she was “jealous” that an unidentified man in the past had “wanted to fuck” McCammond “and not you.” Ducklo also accused Palmeri of being “jealous” of his relationship with McCammond.

On February 12, 2021 the White House press secretary Jen Psaki announced that TJ had been suspended for one week without pay.

“TJ Ducklo has apologized to the reporter, with whom he had a heated conversation about his personal life. He is the first to acknowledge this is not the standard of behavior set out by the President. In addition to his initial apology, he has sent the reporter a personal note expressing his profound regret. With the approval of the White House Chief of Staff, he has been placed on a one-week suspension without pay. In addition, when he returns, he will no longer be assigned to work with any reporters at Politico.”