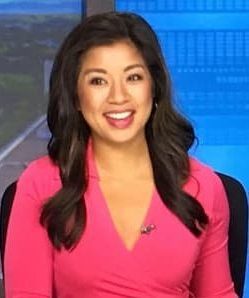 Melissa Lee is an American media personality serving as the host of CNBC’s “Fast Money” and also hosts “Options Action,”  She is also a member of the ensemble cast of  “Power Lunch” and previously worked for Bloomberg Television and CNN Financial News as well as a reporter for the Great Neck Record newspaper.

Lee is an American.

She belongs to Asian ethnicity.

Lee graduated with honors from Harvard College with a bachelor of arts in government. She also served as Assistant Managing Editor of the Harvard Crimson.

Melissa was born and brought up by her parents in Great Neck. Her mother is from Santa Cruz, Zambales Philippines while her father is from Seoul, South Korea, and graduated from Columbia University and then moved to Great Neck, New York. Her parents met while her dad was stationed at Subic Bay. Lee revealed that her parents were very supportive,

“I am blessed to have two loving, supportive parents who have never steered away from teaching me about their cultures. I also grew up eating Filipino and Korean food every day.” Her father and her mother-inlaw started Happy Life Children’s Home in Nairobi, Kenya.  Lee’s grandfather immigrated from rural China to Buffalo, New York in the United States, along with his wife and children. He died of a stroke in 2013. Lee grew up idolizing New York news anchor Kaity Tong, who inspired Lee to become a reporter.

Melissa was brought up alongside her sister and brother James but not much is known about them.

Lee is married to Benjamin Kallo who is  Robert W. Baird & Co.’s Senior Analyst covering energy technology and resource management. He previously served as an Analyst covering clean technology at Stanford Group Company and at Pacific Growth Equities LLC, and a Financial Advisor at Merrill Lynch.  Kallo received a B.A. in economics from California State University-Humboldt and an M.A. in economics from the University of California-Santa Barbara. Lee and Kallo exchanged their marriage vows on 18 August 2017 in a private wedding held in New York and later went for their honeymoon on an exotic jungle safari.

Melissa and her husband welcomed a baby girl named Lennon in January 2019 weighing  7 pounds, 7 ounces, and 20 inches long. The couple later welcomed twins, a boy, and a girl but didn’t reveal their birth date. She posted pictures of her babies on Twitter on March 25th. “For those who have asked — I’ve been kinda busy with these little ones the past few months,” she wrote alongside a picture of her kids in a double stroller. “I’ll be back on [Power Lunch] and [Fast Money] next month!”

Melissa joined CNBC in 2004 and currently hosts te stations show “Fast Money” (Monday-Thursday, 5PM-6PM ET; Friday, 5PM-5:30PM ET), which originates from the Nasdaq’s MarketSite studio in New York’s Times Square. “Fast Money” gives you the information normally reserved for the Wall Street trading floor, enabling you to make decisions that can make you money. She is also the host of “Options Action,” (Friday, 5:30PM ET), a weekly half-hour program that explains the advantages of options trading. In addition, Lee is a member of the ensemble cast of CNBC’s “Power Lunch” (M-F, 2PM-3PM ET).

Previously, she was co-anchor of CNBC’s “Squawk on the Street” and host of “Money in Motion Currency Trading.” She also covered investment banking, hedge funds and private equity for the network. Lee has reported one-hour documentaries for the network, including “Rise of the Machines (2013),” “Code Wars: America’s Cyber Threat”(2011), ”Coca-Cola: The Real Story Behind the Real Thing” (2009) and ”Porn: Business of Pleasure” (2009). In 2008, Lee reported and anchored a one-hour documentary, “Made in China: People’s Republic of Profit,” from Beijing and Shanghai. She reported extensively for the network on China from the country’s growth to its challenges to the opportunities for U.S. businesses.

Prior to joining CNBC, Lee worked for Bloomberg Television and CNN Financial News and as a reporter for her hometown newspaper, the Great Neck Record. Before her career in television, Lee was a consultant at Mercer Management Consulting. Her cases focused on the banking and credit card sectors.

Lee received a 2010 Gracie Award for Outstanding Host-News and a Gerald Loeb Award nomination in 2009 for a CNBC Special Report: “Is Your Money Safe? The Fall of Lehman Brothers,” for which she co-anchored. Lee also has been nominated for two Emmy awards in Business News. In 2007, she was recognized for her report, “The $50M Con,” about a college student-turned scammer who ran a fake hedge fund and was ultimately caught by the FBI. And in 2003, she was nominated for her reporting on the proxy voting of mutual funds.