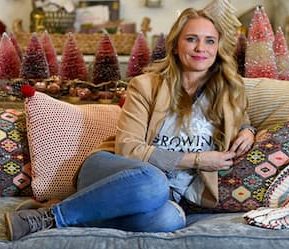 Tamara Day is an American home designer, renovator and television host. She is the host of Bargain Mansion on HGTV and DIY Network alongside her father Ward Schraeder.

Day stands at a height of 5 feet 5 inches tall.

Tamara graduated with a degree in communication from Kansas University.

She is the daughter of Ward and Trish Schraeder.  She has three siblings; a sister and two brothers.

Her dad, Ward Schraeder is a builder, businessman and venture capitalist. He is a co-star of HGTV’s Bargain Mansions alongside his daughter.

He had always been a handyman according to his website, while in high school he helped his high school football coach construct a modest home, and his father rebuild his grandfather’s ranch house. He taught his children construction as his family kept moving as he moved up the corporate ladder, he built a new house each time while living on the first floor as work progressed upstairs. He enjoyed the process that he continued remodeling homes with his children as his crew, teaching them everything from using tools to installing sheetrock.

He has developed ventures that began with a food distribution company, followed by a 2,700-head dairy, medical imaging centers, banks and hospitals/assisted living facilities. He has also delved into an Oregon winery, Freddy’s food franchises, real estate holdings, and oil field explorations.

In December 2019, he joined the board of Rocket Crafters, an emerging propulsion and launch services company producing an affordable payload-to-orbit transport system through new engine technology on Florida’s famed Space Coast.

Not much is known about Trish Schraeder as she does not have any social media account and Ward and Tamara also don’t often post photos with her.

It was a blessing having all four kids (and their kids) under one roof for the holidays. #family

Tamara is married to Bill Day since November 2000. The couple met in 1998 in the Bartle Hall, Kansas City. At the time Tamara was managing a stall selling t-shirts and credit cards while Bill was managing a booth right next to hers. They exchanged numbers and went on a date six months later.

There are those moments in life you look way back and remember. There was this one moment 22 years ago where a boy held my hand just a bit too long. I called my mom to tell her all about this handsome boy I met. This weekend we celebrated his milestone birthday with friends, family, lots of yummy home cooked food and a football game. Happy birthday to my handsome husband I’ve loved for 22 years. May we have 22+ more together and lots more reasons to celebrate together! We love you ?

Bill has a Bachelor’s Degree of Science in Accountancy from the University of Missouri in Colombia. He currently serves as a financial analyst and the owner of BL Day Properties, a property company. He is also the co-owner, partner and principal of Integrated Wealth Advisory Inc.

He has a history in flipping houses and even helped his wife flip their 5,000 square feet house. They had initially planned to hire the workforce, but after the financial crisis during the time, his wife Tamara took it upon herself.

I think fall has finally arrived in Kansas City! Isn’t fall such a magical time? The heat is gone, the trees will soon start to turn, the long sleeves, jackets, and jeans are back. It always seems to be the same time that my kids are ready to hunker down and watch movies in the basement, turn the fireplace on and get cozy! There’s not much better than that, is there?! ? ? What are your favorite things to do in the fall?!⠀⠀⠀⠀⠀⠀⠀⠀⠀ ⠀⠀⠀⠀⠀⠀⠀⠀⠀ ⠀⠀⠀⠀⠀⠀⠀⠀⠀ #eyefordesign #heartforhome #aspirationalbutattainable #laidbackluxe #growingdays #bargainmansions

Day is the host of Bargain Mansions on HGTV together with his dad. The two select sprawling dilapidated homes in the Kansas City area and renovate them.

During an interview with Showbiz Cheat Sheet, she said that she always loved to design. “I think I’ve always loved design. As a kid, my grandma and I always rearranged her living room and I’d help her hang pictures and things like that… I moved from apartment to apartment just like everybody else and each time I’d paint the walls and re-do my bedspreads and decorating the whole space and thrifting. So I think I just always had a natural inclination to it.”

When they bought their house they renovated it themselves. In 2008 Tamara began renovating the house.

“We had to figure it out. So he just kept working and I figured it out. I think that’s when things changed from rental property mindset to design mindset because I was gonna live in it and it was gonna be our long-term home. So I started more on that path of design a little on my own and then here we are.”

People began to notice her work and wanted her to design rooms in their own homes.

“It turned into a business. People saw the house we’d built. I sold a lot of vintage furniture back in the day. People would come in and say, ‘Well, I love this table that I want to buy from you, but I want my kitchen to look like your kitchen. Can you help me?’ And I said, ‘Sure,’ but I had a baby on my hip, and that was fine. I’d just go and help people and it just grew from there.”

She was later noticed by HGTV and in 2017 she began hosting Bargain Mansions on HGTV alongside her father. Her father, Ward stopped by Tamara’s house during filming, and a producer invited him to step into the scene. Ward and his wife bought the first home rehabilitated on Bargain Mansions, which Ward and Tamara rescued after 20 years of neglect.

I always get a lot of flak when I paint woodwork, which I completely understand! I never want to paint it unless that’s the only option and there’s not always enough time in an episode to explain the way I would paint something, but I can tell you that thought never crossed my mind with this beautiful woodwork around the fireplace! It was in pristine condition and obviously the focal point of the home! Which side of the painted woodwork war do you fall on? To paint or not to paint – that is the question!