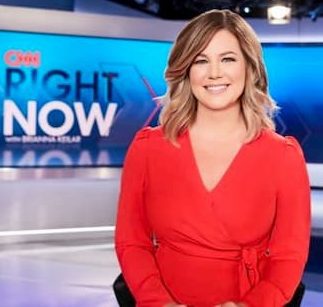 Brianna Marie Keilar is an American media personality serving as an anchor for CNN Right Now weekdays at 1:00 p.m. and is also the author of Home Front, a column that focuses on military families in hopes of bridging the military-civilian divide. She is a former senior political correspondent for CNN based in the Washington, D.C. bureau.

Brianna graduated from Mission Viejo High School where she was voted homecoming queen in her senior year. She has a Bachelor’s degree in Mass Communications and Psychology from the University of California, Berkeley.

She was born to Glenn and Miriam Allen Keilar. Her father is Australian while her mother is American. At the time of her birth her family was stationed in Australia but they moved to the United States in 1982 and settled in Orange County, California. Her mother died in May 2016.

Her mother, Miriam Keilar died in May 2016 of acute leukemia. On October 31, 2016 she wrote a column on CNN titled “Overcoming loss in the middle of a historic campaign” where she details how she lost her mother.

In the article, she notes “My mom is my 3 a.m. phone call, my annual road trip buddy, the connective tissue between my father, sister and me — and one of the funniest people I know. She wrote letters to me in college from the perspective of the family cat. During the election she sent me text messages in the rhetorical stylings of the various candidates.”

Keilar is married to Fernando Lujan, the couple got married on December 30, 2016 in Las Vegas. Fernando is a director for Afghanistan and Pakistan at the White House National Security Council.

Brianna has a son known as Antonio Allen Martinez Lujan who was born on June 8, 2018. She is also a stepmother to Lujan’s older son from a previous marriage, Teddy Lujan.

Merry Christmas from our family to yours!

Brianna is an anchor of CNN Right Now which airs weekdays at 1:00 p.m. She is also the author of Home Front, a column that focuses on military families in hopes of bridging the military-civilian divide.

She joined CNN in 2006 as a correspondent for CNN Newsource, where she provided breaking news coverage and reported from the nation’s capital for approximately 800 CNN Newsource partner stations.

She later became a general assignment correspondent, reporting on a wide range of stories, including the 2007 Virginia Tech massacre, where she was the first CNN correspondent on the ground.

She then served as a congressional correspondent, responsible for covering the activities of both the U.S. House and Senate. In 2008 she covered the $700 billion bank bailout which saw her win the National Press Foundation’s Everett McKinley Dirksen Award for Distinguished Reporting of Congress.

She later began covering the White House serving as senior White House correspondent for CNN, reporting on the Obama administration from the nation’s capital and from around the world. In her position, she covered key stories such as the government shutdown to Obamacare, for which she earned a 2014 Aldo Beckman Memorial Award from the White House Correspondents’ Association. During America’s Choice 2012 coverage, she reported on President Obama’s campaign, the Democratic National Convention, and contributed to the network’s Emmy Award-winning election night coverage.

She also served as CNN’s senior Washington correspondent, responsible for covering important stories on politics, policy and breaking news in Washington. During the 2016 presidential campaign, she served as the lead reporter covering Hillary Clinton and the Democratic field. She also serves as the network’s primary fill-in anchor for The Situation Room with Wolf Blitzer.

Prior to joining CNN, Keilar served as an anchor, reporter and producer for a CBS newscast that aired on mtvU, MTV’s college network. She was also a fill-in anchor on CBS News’ overnight newscast, Up to the Minute, and a freelance reporter for CBS Evening News Weekend Edition.

She began her career in journalism at KTVU-TV, a CNN and FOX affiliate in San Francisco, as a production assistant and intern. She later joined KIMA-TV, CNN and CBS affiliate in Yakima, Wash. where she served as a general assignment reporter. During the same time, she also worked in radio as  a presenter on “Billy, Blue and Brianna Too: The Morning Zoo” for 107.3 KFFM.

Her actual salary is unknown but the average annual salary for a news anchor for CNN is $64, 367.

Brianna has not revealed her political affiliation.

Look, guys, I’m on a poster! And why I am giving off a Tracy Flick vibe with my weird smile I don’t know. ?