"> Who is Andy Barr Wife?Carol Barr Bio, Age, Daughters, Death, Cause of Death
Skip to content 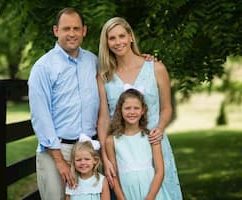 Eleanor Carol Leavell Barr was the wife of Congressman Andy Barr. She died on June 15, 2020 although her cause of death has not been specified.

She had a Bachelor of Arts degree in the College of Communication and Information from the University of Kentucky.

She worked for a decade as a Professional Healthcare Representative with Pfizer, Inc. and spent two years serving as the Executive Director of the Henry Clay Center for Statesmanship. She also worked for Infinity Broadcasting, Viacom, Inc. as an Account Executive.

At the time of her death, she was serving as the director of the Henry Clay Center for Statesmanship. The organization aims to educate future leaders on and enable them with the necessary skills for statesmanship.

Carol was born to Marsha and Woodie Leavell. Her father is an auctioneer in Danville, Kentucky. Her mother died in 2019. She has two older brothers, Mike Hurst and Clay Leavell.

Carol was the wife of Andy Barr, the couple got married on June 21, 2008. There is no information of how long they had been together prior to getting married or how they met.

Happy Mother’s Day from our family to yours. Today, I’m celebrating my wife Carol, and I hope you’ll join me in celebrating all the amazing moms across KY06. pic.twitter.com/pS9S8xcSwW

Andy Barr is an American attorney and politician serving as the U.S. Representative for Kentucky’s 6th congressional district since 2013. He previously served in the administration of Kentucky Governor Ernie Fletcher.

Carol died on June 15, 2020 unexpectedly in the family’s home Tuesday, according to Barr’s office.

“During this tragic time, we respectfully ask for privacy for Congressman Barr and his family to grieve Mrs. Barr being called home to heaven. Congressman Barr may release a more detailed statement at a later date, but right now is solely focused on being a father to his two beautiful daughters.” Barr’s Chief of Staff Mary Rosado said.

The cause of death has not been revealed yet.

Britainy and I are heartbroken for U.S. Rep. Andy Barr and his family tonight at the sad news of the unexpected passing of the congressman’s wife, Carol. We are praying for the Barr family. ^ AB

Heartbroken to learn of Carol Barr’s passing. Carol was a wonderful mother and wife, and she was beloved by all who knew her. She will be deeply missed. My heartfelt prayers are with Andy, their children, and their entire family as they mourn this unspeakable loss.