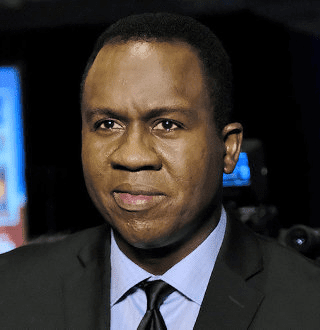 Steve Osunsami is an American journalist. He has been a correspondent for ABC News in Atlanta, Georgia since 1997, contributing reports to World News with David Muir, Good Morning America, and other ABC News broadcasts and platforms.

He was born on 6 February 1971 in Peoria, Illinois, United States.

He has an average height.

He is a graduate of University of Illinois at Champaign-Urbana, where being an Illinois Broadcasting Association intern helped launch his career.

Osunsami’s parents were Nigerian immigrants. His mother was a cafeteria’s cook lady and she struggled to feed her big family.

They were seven children.

Steve is proudly gay and is happily married to Joe Remillard since July 2010. Joe Remillard is an artist, an Art Professor from Atlanta.
Joe was previously married to Marguerite Madden and they share a daughter named Any Remillard.
The two are living happily as a family and Steve being a member of the LGBTQ community he lends his voice to the referendum to legalize same-sex marriage. He can be seen openly speaking about gay rights.

Steve and his husband Joe have no kids.

He is an award-winning correspondent for ABC News based in the network’s Southern Bureau in Atlanta, contributing reports to “World News with David Muir,” “Good Morning America,” “Nightline,” and other ABC News broadcasts and platforms. He began his network career at ABC News in April 1997 as a correspondent for NewsOne, ABC’s affiliate news service.
In 1998, Osunsami began filing reports for “World News Tonight with Peter Jennings,” primarily covering the southeastern U.S.
In August  2014, he was the first network reporter on the scene of the racially charged police shooting in Ferguson, Missouri, and led the network’s coverage of the story. He was also part of ABC News’ Murrow Award-winning reporting team that covered the Baltimore riots in 2015 after the arrest and death of Freddie Gray.
Osunsami was a correspondent for the Emmy® Award-winning broadcast of “ABC 2000: The Millennium,” and has received multiple awards for his work from the National Association of Black Journalists and the Columbia School of Journalism.
Prior to joining ABC News, he was a reporter in Seattle for the ABC affiliate KOMO-TV, and a reporter and substitute anchor for the NBC affiliate WOOD-TV in Grand Rapids, Michigan. For his work at WOOD-TV, he was recognized several times with awards from the Associated Press and the Michigan Association of Broadcasters. He began his career in journalism at WREX in Rockford, Illinois, where he was a reporter and weekend weather forecaster.

He reveals his childhood poverty in a special report for the network “Hunger at Home: Crisis in America.”

Osunsami grew up with his family using food stamps.

“I was a Head Start kid. A food stamp kid. A public housing kid. A Section-8 kid. A government cheese kid. And at many times, a kid who was food insecure,” he writes in a Reporter’s Network blog posted on the ABC’s site.

“My mother worked in a cafeteria at a hospital in town. God rest her soul. She struggled to feed our family of seven and somehow pay the bills. When she could pay them, the bills came first,” he adds.

He earns an average salary of $106K per year.