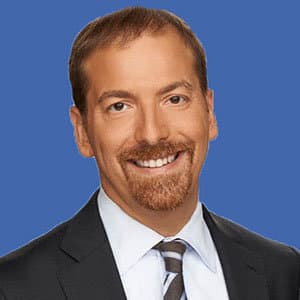 Charles David Todd  is an American media personality working as a  moderator of NBC’s Meet the Press and  also hosts MTP Daily on MSNBC and is the Political Director for NBC News. He  also serves as NBC News’ on-air political analyst for NBC Nightly News with Lester Holt and Today and previously was Chief White House correspondent for NBC as well as host of The Daily Rundown on MSNBC.

Todd stands at a height of 5 feet 2 inches tall.

Todd attended Miami Killian Senior High School in Kendall, an unincorporated suburban community in greater Miami before joining George Washington University from 1990 to 1994 where he studied  political science and a minor in music, but did not earn a degree.

Chuck is the the son of Lois Cheri  and Stephen Randolph Todd. He is Jewish on his mother’s side, and was raised Jewish. His parents married on 20 May 1971 but unfortunately his father died on  14 November 1988. His mother then married Marshall Roper on 21 Dec 1997 in Miami, Florida. She graduated from the University of Miami with a major  in art and a minor in education and worked for a major shopping mall  and also sold real estate while working as a substitute teacher.

He hasn’t shared any information regarding his siblings therefore it’s not known if he has any.

Todd is married to Kristian Denny Todd,  a communications professional and co-founder of Maverick Strategies and Mail, which provides direct mail and consulting services for Democratic candidates and progressive causes. She was the spokesperson for the successful U.S. Senate campaign of Senator Jim Webb in 2006. From 2010 to 2012, Kristian worked with FedEx Corps as an Issues and Crises Communications Consultant, in which she helped establish an education initiative for the corporation. Their wedding date and venue is not revealed .

Chuck and his wife has two children together, a daughter Margaret, and son Harrison.

Chuck successfully lost more than 30 pounds in 4 years. He created a routine for running every day after shifting a little time from his job. In the beginning, he ran for one week straight, then two weeks and ended up running for an extended period. His excitement reached the peak when he noticed his dropping weight. He started including fresher fruits and vegetables in his daily diet plan. His usual routine of running is between 4:30 to 5:30 a.m. as he has to reach office by 6.a.m. He  never took any pills and dominated his overweight only by his dedication and passion.

Chuck NBC News political director and moderator of Meet the Press, spearheads the network’s premier political coverage. He is also a primary anchor for the network’s primetime election coverage and is known for holding politicians and newsmakers accountable: from pressing White House Counselor Kellyanne Conway on “alternative facts,” a term that has now become a common occurrence in American politics, to news-making interviews with lawmakers on both side of the aisle.

Todd has earned the reputation as one of Washington’s most respected political journalist, paving the way for Meet the Press to become the #1 Sunday public affairs program, winning across the board for the 2018-2019 broadcast season. The success of the Sunday program inspired the 1 p.m. weekday show on MSNBC, MTP Daily. Both the MSNBC show and The Chuck ToddCast showcase Todd’s hard-hitting interviewing style, expanding the longest-running show in television history into the modern age. In Nov. 2017, the brand commemorated its 70th anniversary, launching its first-ever film festival, The Meet the Press Film Festival in Collaboration with the American Film Institute (AFI).

Chunk also served as NBC News chief White House correspondent (2008 – 2014), traveling around the world with President Obama and reporting on the main pillars of his presidency, including the passage of the Affordable Care Act. From 2010 to 2014, he also hosted MSNBC’s The Daily Rundown, featuring daily interviews with top congressional members. He has been named “The Most Powerful Journalist in Washington” by GQ as part of the magazine’s “50 Most Powerful People in Washington” list. In 2007 he became NBC News  political director. Prior to joining NBC News, Todd worked at the National Journal’s “The Hotline” for 15 years, serving for six of those years as the editor-in-chief.

He is the author of The Stranger: Barack Obama in the White House. Published in 2014, the Chicago Tribune described the book as “richly sourced and deeply informed,” while Publishers Weekly called it “an even-handed, concise, and thorough account.” Todd is also co-author, with Sheldon Gawiser, of How Barack Obama Won: A State-by-State Guide to the Historic 2008 Presidential Election, published in 2009.

He has an estimated net worth of $2.5million.