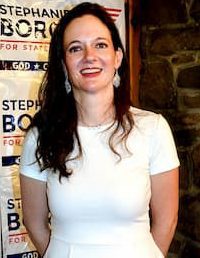 Stephanie Borowicz is an American politician serving as Pennsylvania State Representative serving Clinton County, Centre County. She is the first woman to represent the 76th district. She previously worked as an elementary school teacher and as president of a non-profit organization.

Stephanie attended Altamonte Christian School graduating in 1995. In 1999 she graduated from Vanguard University with a BA in Liberal Studies with a minor in Bible Studies.

Stephanie married her husband Jason Borowicz in 1999. He is an associate pastor at a Christian church in Jersey Shore. The couple have three sons together; Jacob Borowicz, Micah Borowicz, and Braden Borowicz

Stephanie first ran for state representative in 2016 challenging Mike Hanna Sr, who at the time was the minority whip in the House. She however lost the race. In 2018 she ran again against Hanna’s son, Mike Hanna Jr. She on with nearly 54 percent of the vote — or a margin of more than 1,500 votes.

In March 2019 Borowicz delivered a controversial prayer in the House of Representatives a short time before Rep. Movita Johnson-Harrell, the chamber’s first Muslim woman was sworn into office. In just under to minutes Borowicz had mentioned Jesus 13 times, at one point describing him as “our only hope” and professing that as a nation, “we’ve lost sight of you.” She also referenced Israel, President Donald Trump, and Gov. Tom Wolf, among others.

Near the end, Borowicz said: “Every tongue will confess, Jesus, that you are Lord.” Someone yelled, “Objection!” and she concluded the prayer and left the podium.

According to The Philadelphia Inquirer, Johnson-Harrell said that that wasn’t a prayer. She revealed that she initially wasn’t fazed until Borowicz began referencing Trump and Israel.

“At that point, I’m saying, ‘This ain’t a prayer, this is a political statement masked as a prayer.’ It felt intentional, and it felt planned.” She added that the prayer was “Islamophobic, xenophobic, and absolutely degrading”.

In March 2020 Stephanie filed a resolution designating March 30 as “A State Day of Humiliation, Fasting and Prayer”. She states in her resolution that during this time of uncertainty and anxiety, Pennsylvanians may be comforted by turning to a day of “humiliation, fasting and prayer.”

She adds that it is the “duty of all nations” to “own their dependence upon the overruling power of God to confess their sins and transgressions in humble sorrow.” The resolution also states, “With assured hope that genuine repentance will lead to mercy and pardon, and to recognize the sublime truth, announced in the Holy Scriptures and proven by all history: that those nations only are blessed whose God is the Lord.”

Pennsylvania Republican State Rep Stephanie Borowicz has introduced in response to #COVIDー19 a resolution designating March 30, 2020 as “A State Day of Humiliation, Fasting and Prayer” in PA. I do believe this is the stupidest resolution I’ve ever seen a politician introduce. pic.twitter.com/QSP9kzNon7