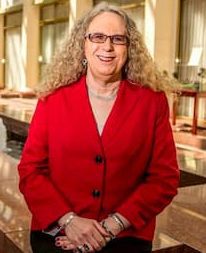 Dr. Rachel Levine is the Pennsylvania Department of Health Secretary and the head of the US Public Health Service Commissioned Corps., becoming the first transgender four-star officer. She is also a professor of Pediatrics and Psychiatry at the Penn State Milton S. Hershey Medical Center. She is also the chief of the Division of Adolescent Medicine and Eating Disorders.

She is the president of the Association of State and Territorial Health Officials. In the past, she has written on the opioid crisis, medical marijuana, adolescent medicine, eating disorders and LGBTQ medicine.

Rachel Levine was born Richard Levine before she transitioned.

Rachel attended Belmont Hill School, Bellmont is an independent school for boys. She later joined Harvard College for her undergraduate studies. In 1983 she graduated from Tulane U, School of Medicine and specializes in pediatric medicine.

Is Dr. Rachel Levine a Man

Dr. Rachel Levine was born a man but has since transitioned and identifies as a woman.

Rachel was born a man but she transitioned and began identifying as a woman in 2011. According to the Washington Post, she started seeing a therapist in 2001 and at around 2008 she started to grow out her hair before publicly announcing herself as a transgender woman. She took voice lessons to sound more like a woman. Rachel, however, doesn’t like to discuss whether she took hormones or had surgery as she calls it a private medical matter.

Dr. Rachel identifies as a woman. On May 13, 2020 during a conference call KDKA radio host Marty Griffen repeatedly called her ‘sir’ to which Rachel responded; “Please don’t misgender me. It’s really insulting.”

Dr. Rachel keeps her personal life very private. The Inquirer wrote that she grew up in Wakefield, Mass., a suburb north of Boston, in a family of lawyers. She has also mentioned in news conferences missing getting to see her elderly mother in person but calling frequently.

Dr. Levine has not revealed the name of her mother but during a press briefing on May 13, 2020 she said that she had recently moved her 95-year-old mother out of a personal care home. She said that her mother had requested to be moved and defended her mother’s relocation, describing her mother as “more than competent to make her own decisions.”

“My mother requested and my sister and I, as her children, complied to move her to another location during the COVID-19 outbreak. My mother is 95 years old. She is very intelligent and more than competent to make her own decisions.”

After she was criticized for moving her mother she clarified that she was not in a nursing home, but rather a personal care home, which falls under the jurisdiction of the state Department of Human Services, a separate entity from the agency she served.

In Pennsylvania, a personal care home is legally differentiated from a nursing home or assisted living facility. All three are licensed by the state with the key difference being the level of care. According to the Department of Human Services, which regulates personal care homes, the facilities offer assistance for people who need help with daily tasks — such as bathing and doing laundry — but do not need medical care. They’re designed to allow residents to live with greater autonomy for long periods of time before eventually transitioning to more advanced care.

Rachel was previously married to Martha Peaslee Levine before she transitioned. The couple got married during Rachel’s fourth year at Tulane Medical School. They divorced in 2013.  Martha is an associate professor of pediatrics, psychiatry and humanities at Penn State Milton S Hershey Medical Center in Pennsylvania.

She has two children from his marriage to Martha; Dayna and David Levine.

Rachel keeps her personal life private, there is no available information on whether she has a husband or not.

Levine completed her pediatrics training at Mount Sinai Medical Center in New York, where she practiced from 1988 to 1993. She later developed an interest in the intersection of medical, mental and behavioral health issues – such as individuals with bulimia and anorexia. This saw her become the chief of the Division of Adolescent Medicine and Eating Disorders and vice chairwoman for Clinical Affairs for the Department of Pediatrics at Penn State Milton S. Hershey Medical Center.

She also served as a doctor at Penn State Milton S. Hershey Medical Center and served on the board of Equality Pennsylvania, an organization that lobbies for equal rights for people in the LGBT community.

In 2015 Levine became the highest-ranked transgender woman in Pennsylvania state government history after she was appointed as the Pennsylvania Physician’s General by Governor Tom Wolf.

In 2018 she was named the Pennsylvania Secretary of Health. As the secretary of health, she has a few accomplishments as she has seen falling overdose rates in some Pennsylvania counties to such efforts as making overdose reversal drugs like naloxone more available. More overdose survivors are getting treatment as a result of state-driven efforts.

On May 11, 2020 Pennsylvania State Senator Doug Mastriano called for the resignation of Dr. Rachel. She claimed that Levine has not been aggressive enough in protecting the state’s older population and her actions have resulted in a large number of cases among the state’s elderly care homes.

Governor Wolf however defended Rachel saying; “Dr. Levine has done a phenomenal job in making sure we do what we need to do to keep Pennsylvanians safe.”

On January 19, 2020 President-elect Joe Biden appointed Rachel Levine to be his assistant secretary of health, leaving her poised to become the first openly transgender federal official to be confirmed by the U.S. Senate.

In a statement Biden said; “Dr. Rachel Levine will bring the steady leadership and essential expertise we need to get people through this pandemic — no matter their zip code, race, religion, sexual orientation, gender identity, or disability — and meet the public health needs of our country in this critical moment and beyond. “She is a historic and deeply qualified choice to help lead our administration’s health efforts.”

On October 19, 2021 Rachel was appointed to serve as head of the US Public Health Service Commissioned Corps becoming the first transgender four-star officer and also the organization’s first female four-star officer.

Prior to the appointment, she has never served in the military or any other branch of the armed forces before her role in the Uniformed Services of the United States.

I am deeply honored & grateful to join the ranks of men & women across this great nation who have committed to defend the United States against small & large threats, known and unknown. I promise to uphold that trust to the fullest extent of my abilities. https://t.co/ryfwRqbAoz