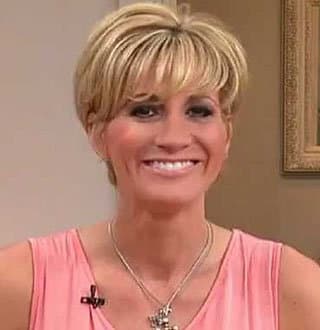 Shawn Elizabeth Killinger is an American media personality working as a newscaster and anchor for QVC.She previously served as an intern at CBS Evening News with Dan Rather and The Late Show with David Letterman before moving up as a production assistant and also worked for  WUHF-TV, a Fox-affiliated television station as the general assignment reporter.

Killinger was born on November 2nd, 1979, in Detroit, Michigan.

Killinger stands at a height of 5feet 5 inches tall.

She attended the International American School Foundation, and upon matriculation went to Penn State University where  she graduated with a Bachelor of Arts degree in Marketing.

Shawn is the daughter of David Killinger Sr. and  Loandra Killinger.  Due to  her father’s job, who  worked with Ford’s labor unions, the family  had to move to Mexico City in Mexico  including Shawn, who was then   11 years old. She was brought up alongside her two brothers whose names hasn’t been revealed.  . Shawn’s father  who was battling pancreatic cancer passed away on May 2, 2020.  Shawn was allegedly caring for him for a while and also took him to his chemotherapy sittings and treatments. Shawn posted a photo of her holding her dad’s hand on her Facebook page. She also eulogized her father in a very touching tribute on her Instagram page.

Killinger is  married to Joseph ‘Joe’ Carretta ,an   American businessman and professional consultant  who is currently the Executive Director of the Sunrise Senior Living, the fifth largest assisted living provider in the states. He is also a musician and  graduated with business degrees from Temple University and Drexel University. The couple met on a dating site and soon after began their relationship .They exchanged their wedding vows o13th April 2013.n However, the two have not been  fortunate enough to welcome their own children, as Shawn suffered a miscarriage back in 2014.

Having suffered a miscarriage in 2014, Shawn and her husband  decided to adopt a child. They  adopted a baby girl and named her Jagger Jude Killinger-Carretta, in the year 2017.  Her  husband has two sons from previous affairs. a Shawn Killinger currently resides in West Chester, Pennsylvania together with her  husband , her adopted daughter and her husband’s two sons.

Killinger gained nationwide popularity in 2005 when she was chosen as one of 16 competitors in the NBC reality series “The Apprentice: Martha Stewart” from tens of thousands of applicants from around the USA. The reality show depicted Martha Stewart testing the 16 participants for their various skills, including media, entertainment, design, culinary expertise and style to find the perfect apprentice for her business.

The competitors were divided into two competing teams and were given weekly assignments and quests to compete while battling for the spot of the apprentice of business tycoon Martha Stewart. Shawn  made it to the third week of the show when Martha Stewart dismissed her following her alleged statement “Fake it till you make it” while filming the reality series and preparing for a quest. Even though Shawn Killinger was dismissed early on from the popular show, and won nothing material, her fame and popularity grew throughout the country.

She actually joined Martha Stewart later on to promote a QVC apparel line.

Shawn  started working for the leading US TV shopping network giant QVC in 2007. Since then, she has established herself as one of the faces of the broadcast, cable, and satellite shopping network. She is a program host with daily online live appearances and hosts four hour TV shopping broadcasts which are unscripted, and yet manages to keep the viewers entertained, and the sales volumes growing.

The annual sales of QVC have been steadily growing for years, and now are worth millions of dollars, and Shawn Killinger is believed to have been playing a significant role in this ongoing success.
Killinger is also the host of the annual Oscars red carpet beauty coverage “Live from L.A.,” as well as the yearly coverage of NYC fashion week. Through the years at QVC, she has established herself as a primetime lifestyle, beauty, and fashion authority.

Prior to working for QVC, Shawn worked at the CBS Television Network as a reporter for different shows, including “CBS 60 Minutes”, “The Late Show with David Letterman,” as well as for the “Evening News with Dan Rather.” She also worked as a general assignment reporter at a FOX Network affiliated TV station WUFH-TV.
Through the years, Shawn Killinger continued developing her reporting and journalism skills by working at several other different TV stations, including WKMG-TV, a CBS affiliate TV station in Albany, as well as in New York, Florida and Orlando. She also appeared as a co-anchor for the CBS Channel 6 Morning News for some time.

Apart from being a successful reporter and television host, Killinger is also known for being a philanthropist – since 2008 she has been actively involved within the Make-A-Wish Foundation, serving as its “Wish Granter” for children suffering from life-threatening illnesses.

There have been ongoing rumors for some time that Shawn Killinger is suffering from cancer. None of these rumors have been confirmed by her or by anybody associated with her. Some sources claim that she was diagnosed with cancer but managed to overcome the disease and is cancer-free. She recently posted a sweet Father’s day post and photo of her grandfather, who managed to beat pancreatic cancer at the age of 80.

She has an estimated net worth of  over $1 million.