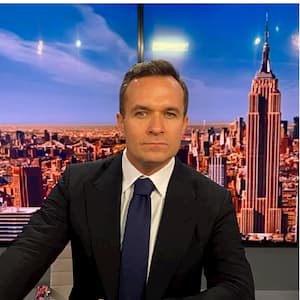 Gregory Raymond Kelly is an American media personality who currently hosts the  “Greg Kelly Reports,” on News max TV and was previously the co-host of Good Day New York on Fox 5 NY WNYW, with Rosanna Scotto.  Greg also co-hosted   Fox and Friends and was a White House correspondent for Fox News.

Kelly graduated from Fordham University with a B.A. in political science.

Kelly is the son of Raymond W. Kelly and Veronica Kelly. His father is former New York City Police Commissioner,   the longest serving Commissioner in the history of the New York City Police Department and the first man to hold the post for two non-consecutive tenures . He graduated with a Bachelor of Business Administration from Manhattan College in 1963 and  also holds a J.D. from the St. John’s University School of Law, a LL.M. from the New York University School of Law and an M.P.A. from the Harvard Kennedy School.He was also a Marine Corps Reserve colonel, director of police under the United Nations Mission in Haiti, and an Interpol vice president. During the Clinton administration, Kelly served as Treasury Department Under Secretary for Enforcement, as Customs Service Commissioner and was in the running to become the first United States Ambassador to Vietnam. He met his future wife Veronica on the beach at Island Park, New York, where his family had a summer residence.

He was raised alongside his brother James Kelly.

Kelly is married to Judith Gray, a creative director in advertising. The duo met after two months of online dating and after almost three years of dating, they exchanged their marriage vows on November 12, 2017 at New York’s University Club with guests including his former Fox 5 colleagues Scotto, Mike Woods and Ines Rosales.

Kelly said at the reception: ‘One of the many things I love about Judith is she doesn’t dance, and she loves that I don’t dance either. So there will be no traditional first dance.’

Greg and his wife has a daughter named Analise who was born in February 2020.

Prior to joining Mediamax, Greg was a host of Good Day New York from 2008 through June 2012 when he was promoted to the 6 and 10 pm news, on Fox 5. David Price was announced as his replacement. On January 24, 2013, it was announced that Dave Price would be leaving Good Day New York and Kelly would be returning. On September 28, 2017, Kelly announced he was leaving Good Day New York, and the next day, Friday, September 29, 2017, he appeared for the last time. He was replaced by former WABC-TV anchor Lori Stokes. On Kelly’s last appearance on the Fox 5 show he said: ‘There are some other things I’m excited about doing and I am very, very grateful for all the time I’ve had here and for all the people who make this show possible.’

Kelly was also an anchor for the morning news program at ABC affiliate WIVT-TV in Binghamton, New York, where he secured an exclusive interview with then U.S. President Bill Clinton.  He also worked as a political reporter for NY1 in New York City, where he covered the 2001 mayoral campaign, and provided extensive live reports from Ground Zero on September 11, 2001.

Kelly was the first television journalist to broadcast live pictures of U.S. military forces reaching Baghdad on April 5, 2003. Information Minister Muhammad Said al-Sahhaf, a.k.a. Baghdad Bob, was shown at one of his press conferences saying that Coalition forces were not in Baghdad, Fox News was showing, in split screen, reporter Kelly riding a tank through the city. Two days later, he captured another exclusive during the storming of Saddam Hussein’s presidential palace.

In January–February 2012 Kelly was investigated by the Manhattan District Attorney’s office upon an accusation of rape. He was never arrested nor charged with a crime. After an investigation, the District Attorney issued a letter stating that under NY state criminal law, the incident did not constitute a crime. The Huffington Post characterized the District Attorney’s findings as a “total exoneration” of Kelly. He  returned to work February 13, 2012. On June 9, 2014, Kelly’s accuser spoke publicly for the first time about her 2012 allegations against Kelly

Kelly is an officer in the U.S. Marine Corps Reserves. During his tour of active duty military service between 1991-2000 he was a pilot of an AV-8B Harrier jump jet assigned to the Marine Attack Squadron 211, the “Wake Island Avengers”. While on duty Kelly successfully amassed over 158 aircraft carrier landings and flew over Iraq in Operation Southern Watch, enforcing the United Nations imposed No-Fly Zone

He has an estimated net worth of $ 3million.