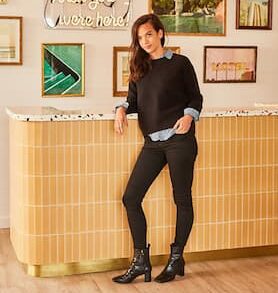 Sarah Sklash is a motelier and co-founder of The June Motel. She is also a cast on Netflix’s Motel Makeover alongside her friend and business partner April Brown.

Sarah graduated from the Ivey Business School at the University of Western Ontario where she studied Business Administration.

She is the daughter of Karen Sklash. The name of her father is unknown.

Sarah got married to Rodolphe in July 2019. She doesn’t share much about him on her social media pages.

Sarah and April Brown have been friends for more than 15 years. The two friends are co-founders of The June Motel in Prince Edward County. The duo met at the University of Western Ontario, in first year when they both joined the same sorority.

Sarah is the co-founder of The June Motel alongside her friend April Brown. The duo bought the motel in 2016, at the time it was known as The Sportsman Motel. They were looking for the next chapter in their lives in both their careers and personal lives. Their jobs were not as fulfilling as they once were. They had been going out to Prince Edward County (PEC) with their friends for years and Sarah and her boyfriend had bought a cottage in the area, so they had seen first-hand how the area had grown in popularity year-over-year.

After they bought the motel, PEC was becoming the new hot spot and had just been named one of the top places to visit by Travel & Leisure. But despite the popularity of the area, everyone seemed to struggle to find a place to stay. they decided to transform the motel by themselves.

Since the motel was still operational by the time they bought it, they operated it as the Sportsman Motel until the end of October and then closed down. They reopened on May 5 after finishing the renovations.

Prior to becoming a motelier, she was a project manager and business analyst for the Ontario Public Service.

Sarah is a cast member of Netflix’s ‘Motel Makeover’. The series follows Sarah and her business partner April Brown as they renovate their second location of The June Motel up and running in Sauble Beach, Ontario.

“There’s drama that comes with this size of a renovation, and who doesn’t watch a show for a little bit of drama? Our previous motel was 16 rooms; this was 24 rooms, so (you’re) making decisions that you’re not just going to make once, but you have to like that decision 23 more times.

Everything’s at a much larger scale, and for us it made it really hard. We haven’t done something this size – the rooms, the pool, the indoor/outdoor restaurant and the shop. It was a lot.”

Sklash is not Trans. She was born female.