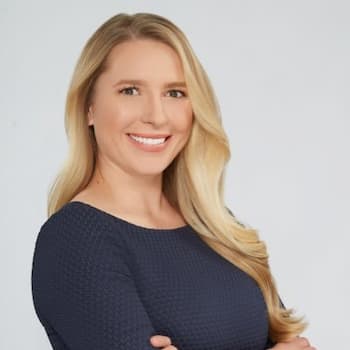 Hillary Vaughn is a media personality serving as FOX Business correspondent based in Washington, D.C. She is the wife of Fox News White House Correspondent, Peter Doocy.

Hillary is married to Peter Doocy. The couple got married in April 2021. Peter is also a journalist serving as White House correspondent for FOX News Channel. He covers the president of the United States’ domestic and international activities as well as the issues impacting the administration. He previously served as a general assignment reporter based in the New York bureau.

Vaughn is a FOX Business correspondent based in Washington. She joined the network in 2016. During the 2020 presidential election cycle, Vaughn traveled throughout the country to key voting states where she focuses reporting on the issues that matter to voters in each region. Her on the ground reporting in Des Moines, Iowa ahead of the 2020 Iowa Caucuses was featured on FOX News Rundown’s “American Dream Series,” on the FOX News Audio platform.

Prior to becoming a correspondent, she was a member of the second class of the FOX News’ Junior Reporter Program, during which she was stationed in Manchester, N.H to gain experience in on-the-ground reporting training. In 2016, she officially became a reporter in the field.

Her actual salary and net worth are unknown.