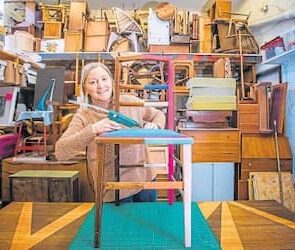 Sarah Peterson is a furniture restorer based in Perthshire, Scotland. She is an expert on BBC’s Money for Nothing where she reclaims furniture and transforms basic items into bold items. She has a furniture upcycling shop in Perth called Sarah’s Attic where she restores anything from chairs to retro cabinets.

Sarah is married to Alfie Iannetta the founder and director of Tayside Upcycling & Craft Centre CIC , a previous chief executive of the Black Watch Museum in Perth who oversaw the redevelopment of the attraction in 2013.

Sarah first joined Caithness when 15, in the Perth factory shop before progressing to paperweight maker. In 1993 she went to London and in 1995 began a degree course in ceramics and glass. A year after graduating she rejoined Caithness in 2000 as a design developer and by 2008 she was the lead designer.

She spent almost 20 years at Caithness Glass. Within this time she was in charge of Art Glass design for Dartington Crystal and designing among many other original works, the Chamber of Commerce Star Awards for four years.

She spent many years specialising in the technique of sand casting, creating individual works of art and one-off designs. The sand castings are created from the fusion of sand, colour and glass, each of these elements brings a unique feel to the sculpture.

Sarah is a professional furniture upcycler and owner of Sarah’s Attic. According to her website, her passion for creating things has been with her since childhood. In 1983, when she was in primary 6, she was pictured in the local newspaper with one of her many creations – her Christmas Nativity scene made entirely of plasticine.

After leaving Caithness Glass she began to explore her hobby of upcycling. She revealed that she recovered and painted an old green chair that her Granny had given her mum when she and her twin brother were born.

“It looked really good and people started asking me to do things for them. Lots of my design skills from years at Caithness crossed over – it was just the medium that changed. As long as I was deigning something I was happy. I quickly realised I could move my hobby into a business and began looking in charity shops for bits of furniture I could transform. We like to change things far more often than past generations did and there are so many great pieces of good quality furniture just thrown out. By sourcing my core products in this way I feel like I’m running an ethical business and doing my bit to help cut back on landfill and waste. It also means that people get a genuine, original piece as no two items are ever the same.”

Sarah Peterson Money for Nothing

Peterson is an expert on Money for Nothing on BBC where she recycles furniture. The show challenges ‘upcyclers’ and designers to make the most money from items that otherwise would have been thrown in the bin.

According to Daily Record, Sarah was approached by the production crew of Money for Nothing after spotting her talent on her website.

Her husband, Alfie explained: “The production crew did some research on upcycling in the UK and found Sarah’s website and she needed to do a Skype interview before they came up to Perth to do the filming. Money for Nothing is a typical BBC afternoon programme, like Cash in the Attic or Homes Under The Hammer – it’s a tried and tested format. They have presenters who go to recycling centres across the country and take stuff off people who were going to throw them away to do something with it.

They have a team of designers all over the place who specialise in different things, and the items are sent to them to work their magic on. We’ve done five programmes for them, and the first one that airs is a celebrity episode on Thursday, where Sarah will be working on a Paralympic athlete’s suit from the Sydney Games.”