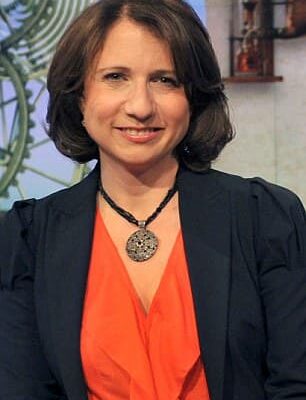 Joanne Dawn Coburn is a British media personality working for BBC News as a regular presenter of Politics Live as well as an occasional relief presenter on the BBC News Channel. She previously worked for local radio stations including Mix 96 Aylesbury, Fox FM Oxford, and Star FM in Slough.

Jo was born and raised up by her parents in Hendon but she has not revealed their identity since she has kept her family off the public eye. It’s also not known if she has any siblings.

Jo is married to Mark Flanagan, a Senior Partner for Content and Digital Strategy at Portland Communications in London. He previously worked at Downing Street where he was head of strategic communications, working for the Labour and Coalition Governments, and was also Managing Director of LBC  as well as Operations Director of the media company Chrysalis Group plc where he was responsible for regional radio and online. Mark also worked as a journalist, DJ, and manager in a variety of commercial radio stations around the UK.
He attended Leeds Trinity and All Saints College and graduated with a BA in History & Public Media. Jo and Mark exchanged their vows in 1998.

Coburn and her husband have two sons together but not much is known about them.

Jo serves as a  regular presenter of Politics Live (and formerly also Sunday Politics along with Andrew Neil).  She is a former BBC political correspondent for London, who covered the 2000 London Mayoral election. She is also an occasional relief presenter on the BBC News Channel. She has presented on BBC Radio 4 in the past and also has guested on the weekend current affairs programme The World This Weekend as well as reviewing the Sunday newspapers on The Andrew Marr Show.

Coburn joined BBC Breakfast in 2001 as a political correspondent and she went on to cover the 2001 general election. During her time at BBC Breakfast, she covered events surrounding the War in Afghanistan and the Iraq War and returned from maternity leave in 2005 to report on that year’s general election.

She spent some time presenting on the BBC News Channel, and three months as presenter of BBC Radio 4’s political events programme The World This Weekend. She also covered the 2007 French presidential election and the Treaty of Lisbon ratification process. In 2008, she was part of the press pack during British prime minister Gordon Brown’s visits to both Afghanistan and to Beijing for the closing days of the 2008 Summer Olympic Games.

Prior to joining BBC, Jo worked for local radio stations in Berkshire, Buckinghamshire and Oxfordshire,  including Mix 96 Aylesbury, Fox FM Oxford, and Star FM in Slough.

Her average annual salary is unknown.