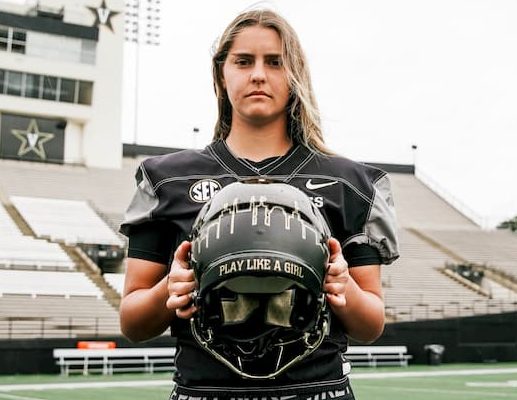 Sarah Fuller is an American football player serving as Vanderbilt football placekicker. On November 28, 2020 she became the first woman to play in a Power Five football game.

She stands at a height of 6 feet 2 inches tall.

Her weight is unknown.

Fuller has not revealed the name of her parents but during the Power 5 game they were present to support her.

Sarah Fuller visits with her family before the @VandyFootball vs. Missouri game kicks off ? pic.twitter.com/1B2QrWJ0Qz

There is no information available on her personal life.

Fuller is a senior keeper for Vanderbilt’s SEC championship soccer team. During the fall 2020 season, she started nine of Vanderbilt’s 12 games recording three clean sheets on the way to a 7-2-0 record in net. With 0.97 goals against average, the number stands as the eighth-best mark in a season in Vanderbilt soccer history

Starting all four games during Vanderbilt’s 2020 SEC Tournament championship run, posted a shutout in the second round against Mississippi State (11/15/20) and had an assist in the quarterfinals against No. 13 Tennessee (11/17/20).

On November 28, 2020 Sarah became the first female to play in a Power 5 college football game when Vanderbilt faced Missouri on Saturday afternoon. The Power 5 conferences are the ACC, Big Ten, Big 12, Pac-12, and SEC, the biggest conferences in Division I intercollegiate athletics.

No woman had previously appeared in a Southeastern Conference football game or for any Power 5 gridiron team. Only two others – Katie Hnida for New Mexico and April Goss for Kent State – have ever appeared in a Football Bowl Subdivision contest.

During the game she wore a helmet written “Play Like A Girl” which was meant to encourage young women to get involved in athletics and to become aware of a science, technology, engineering and mathematics camp scheduled for March in Nashville. She also wore No. 32 for the Vanderbilt women’s soccer team.

She kicked off to start the second half of Vanderbilt’s game against Missouri. Her kick traveled 30 yards. The winless Commodores had yet to give her a chance at a field goal or extra point after being shut out in the first half by mediocre Missouri.

During the Power 5 game Sarah wore a helmet t written “Play Like A Girl” which she had previously explained was meant to encourage other women to follow in her footsteps.

In a tweet, she said: “Tomorrow I will be wearing ‘Play Like a Girl’ on the back of my helmet. @iplaylikeagirl is a nonprofit that encourages girls to play sports and get exposure to STEM opportunities.”

Tomorrow I will be wearing “Play Like a Girl” on the back of my helmet. @iplaylikeagirl is nonprofit that encourages girls to play sports and get exposure to STEM opportunities. Check them out! #playlikeagirl https://t.co/2inXh5PM2V pic.twitter.com/W7lF9dXkUR

During the 2020 season, she played in nine matches, collected 28 saves and recorded three clean sheets.

Sarah has signed to join the Mean Green in 2021, this announcement was made on November 13, by North Texas women’s soccer. Sarah also made the announcement on Twitter, “I am very excited to head to North Texas next fall to get my Master’s in Hospital Administration and continue my soccer career with an incredible program! #GMG.”

I am very excited to head to North Texas next fall to get my Masters in Hospital Administration and continue my soccer career with an incredible program! #GMG https://t.co/wiIsyrw45l

John Hedlund, North Texas women’s soccer coach, said; “A big part of our championship success at UNT has always been having a great keeper in goal for us throughout my time here. Sarah brings that presence with her experience as the starter for Vanderbilt this season and playing in the SEC. … We’re excited to have Sarah for the next two years working on her master’s degree here at UNT. Welcome home!”