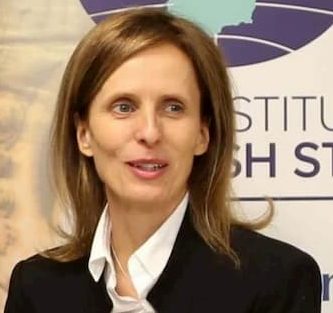 Guerin attended a convent school. She qualified as a journalist in 1985 with a Certificate in Journalism from the College of Commerce in Dublin. She also holds a Masters Degree in Film Studies from University College Dublin.

Orla was born and raised by her parents in Dublin. She hasn’t revealed much about her parents but in an exclusive interview she revealed how proud of her parents she was “I am profoundly grateful that I had the chance to go to college and pursue my dream of being a journalist. Both of my parents had to leave school at 14, and my Mother was forced to give up her job when she married, as there was a bar on married women in the workplace until 1973. Whatever I have managed to do is because of the support of my parents, so if I am proud of anything, it is of them” Guerin was brought up alongside her sister whose name is not revealed.

Orla is married to Michael Georgy a Reuters correspondent whom she met in Bethlehem. The couple got married in 2003.

Orla joined the BBC as a news correspondent in 1995 and in January 1996 was posted to the West Coast of America based in Los Angeles where she handled a variety of stories including the Oscars.

She was BBC’s Southern Europe correspondent – based in Rome – from July 1996 to June 2000. During this period she reported regularly on the Kosovo conflict . In 1999 she was expelled from the regional capital Pristina by Serb forces at the outset of the fighting. She reported from Macedonia on the plight of the refugees fleeing the border. Upon re-entering Kosovo – as Nato forces took control – she covered the eventual return of thousands of refugees who had been forced from their homes.

Orla also reported extensively on the conflict in the Basque country in Northern Spain. She broke the story of the cease-fire by the Basque separatist group ETA in October 1998, which was a world exclusive. Her documentary on ETA for BBC Two’s Correspondent programme was nominated for a Bafta award.

Prior to joining the BBC, Orla worked as a newscaster, presenter and foreign correspondent for Ireland’s RTE News. Here she won the Jacobs Award and covered major stories including, the former Soviet Union, the break-up of the former Yugoslavia, and, the siege of the Bosnian capital, Sarajevo.

Orla is not related to Veronica Guerin who was an Irish Irish crime reporter who was murdered by drug lords. She was shot six times, fatally on June 25, 1996 while at a red traffic light stop on the Naas Dual Carriageway near Newlands Cross, on the outskirts of Dublin.