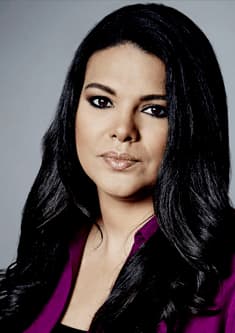 Sara Sidner is an American media personality serving as a correspondent for CNN and CNN International based at CNN’s Los Angeles bureau. She previously worked as an anchor and reporter at local television news stations in San Francisco, Dallas, Florida, and Missouri.

Sidner attended Hialeah-Miami Lakes High School and later joined the University of Florida where she graduated with a degree in telecommunications and was named an Alumni of Distinction in 2011.

Sidner was born to an African-American father and a British mother. She has not revealed any further information regarding them. She remembered sitting in class as a child while her teacher stood and starting taking roll, marking down the race of each student in the room. “He was trying to figure out whether I was black or white, and he looked at me, and he said, ‘You know what; you’re a smart kid; I’m going to check white,’ ” said Sidner. “It definitely had an impact on me,” she said. “It made me want to fight back and say, ‘I can be black and smart. Those are not separate entities. Those are not different things.’

No information on whether she has any siblings is not available.

Sara is married but she hasn’t revealed the identity of her spouse. However, in an exclusive interview in the talk show TV Newser on 23 March 2015, Sara revealed that she was married but her tight worked schedule remained the greatest challenge in her marriage as she barely finds time to be with her husband.  She also revealed that she and her boyfriend made their wedding plans on a satellite phone while she was in Africa covering the Lybian war. She laughed as she added that her husband always teased her by telling her to ensure she made it to her own wedding.

She hasn’t revealed any information on whether she has any kids.

Sara Sidner is CNN’s national and international correspondent, based in the network’s Los Angeles bureau and was previously based in Jerusalem, Abu Dhabi, and New Delhi, India. Sidner led the coverage in Ferguson, Missouri where protests continued for months after an unarmed black teenager was shot and killed by a white police officer. She was there for weeks while a grand jury looked at the evidence and ultimately decided not to indict the officer. Their decision sparked two nights of violence in Ferguson but it also lead to nationwide protests and a national conversation about race and policing in America, as well as a state commission and Presidential task force on policing.

Sara was part of the team that won a Peabody award for CNN’s coverage of the Arab Spring. Her work in Libya reporting in the midst of rebel fighters during the fall of Tripoli has been recognized all over the world. In 2011 Sidner shared the Achievement of the Year Award from SKY WFTV Women in Film & Television in the United Kingdom for her war coverage in Libya.

While in India, she headed the coverage of South Asia from the New Delhi bureau. One of her first major international stories unfolded when terrorists attacked several places in Mumbai, including the famed Taj Mahal Palace and Tower Hotel, on November 26, 2008. Sara was live throughout the 2008 siege that lasted 60 hours and took more than 170 lives. Her stories from South Asia also included a documentary on the 25-year civil war in Sri Lanka, several stints reporting in war-torn Afghanistan, and live coverage of violent political eruptions in Thailand and Bangladesh. She also explored many stories about the social and economic developments in India, culminating in a series of stories for CNN International’s award-winning “Freedom Project.” Sidner also traveled to Chile and Haiti to cover the aftermath of devastating earthquakes in those countries.

In 2014, Sidner also reported from Malaysia on missing Malaysia Airlines flight 370, from Ukraine on the downed Malaysia Airlines flight 17, and from the Israeli border during the 2014 war between Israel and Gaza. Prior to joining CNN, Sara also worked at WUFT-TV in Gainesville, Florida, KFVS-TV in Cape Girardeau, Missouri, WINK-TV in Fort Myers, Florida, and KDFW-TV in Dallas, Texas. At KDFW, she spent three years as a consumer reporter/anchor.She also distinguished herself for reporting on the Space Shuttle Columbia disaster. In January 2004, Sidner joined KTVU in Oakland, California, where she served as a weekend co-anchor of KTVU Channel 2 News at 6 and The Ten O’Clock News. She also served as a weekday reporter for the station.

Sidnerhas won many awards including two Alliance for Women in Media Gracie Awards; one for her coverage of India’s unwanted girls where she explored the issue of female infanticide in India, and a second for her breaking news coverage of the 2012 Gaza-Israel conflict from Gaza & Israel. She also won two Asian Television Awards — one for her 2011 report on the horrors faced by young Bangladeshis forced into begging and a second for the 2012 Freedom Project documentary ‘Operation Hope’, which chronicled the extraordinary journey, from suffering to recovery, of one of these children, a seven-year-old boy who was castrated and left for dead when he refused to beg.

Sidner receives an annual average salary of $144167 according to CNN anchors/reporters’ salaries.