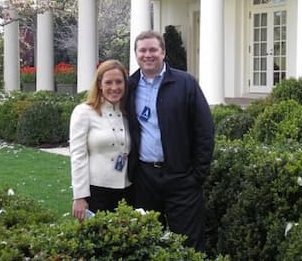 He graduated from Northern Kentucky University with a Bachelor of Arts degree in Communications and television production.

He is the son of Mary Ann Mecher and Michael Mecher. His mother is a former teacher who taught 4th grade at a Catholic elementary school in Cincinnati while his father is a former mechanical engineer in Hebron, Kentucky.

Mecher is married to Jen Psaki since May 8, 2010.  Jen is a political advisor serving as the White House Press Secretary. She previously worked as the White House Communications Director during the Obama administration and had also worked in the United States Department of State as a spokesperson.

The couple met in 2006 while they were both working the Democratic Congressional Campaign Committee. Mecher served as a deputy finance director at the DCCC who regularly traveled in “a very small entourage”. They both had heavy travel schedules, but occasionally found themselves at DCCC headquarters at the same time. Mecher would make a point of regularly trying to walk by Psaki’s desk, which was 20 feet from his own.

He told the Washington Post that he would regularly walk by Psaki’s desk, which was 20 feet from his own.

“But when she’s at work, she’s very focused — it’s like tunnel vision. Whenever I would do it, she had the headset on, talking on the phone, the BlackBerry she was typing on and the actual computer in front of her where she was talking to someone else . . . so there was no way to accidentally get her attention.”

One evening after a shared cab ride and some flirting at 18th Amendment bar on Capitol Hill Mecher made up his mind to ask her out. The last Friday in September, he sent Psaki an e-mail asking her to dinner. She quickly wrote back saying yes.

The two decided to try long distance dating after Jen got a job offer from the Obama campaign and was asked to move to Chicago in February 2007. In 2009 Mecher proposed to her at home.

Together with his wife they have two daughters.

Gregory served as chief of staff for Rep. John Kennedy III and worked with the Democratic Congressional Campaign Committee and a deputy finance director at the DCCC. He began his career in politics while still a college student as he sedrved as the president of the NKU Student Government Association (SGA). He had been a member of the student senate for two years before he emerged as the head of the SGA.

He said while he served as the “student representative to the Board of Regents” his fellow student co-regents helped him secure an internship with Congressman Ken Lucas, who represented Kentucky’s 4th district from 1999 until 2005.

After graduating college he successfully sought jobs on Capitol Hill. He worked as chief of staff for Congressman Steve Driehaus of Ohio and Patrick Kennedy.