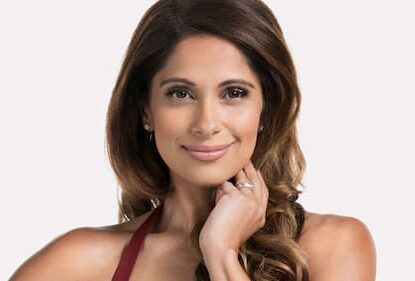 Sangita Patel is a Canadian media personality serving as the host of ET Canada Weekend and HGTV’s How To Win. She is an engineer by profession and has also served as a weather specialist.

Sangita hasn’t revealed the name of her parents but she shares their photos on social media. She has three siblings; an older brother and sister and a younger sister.

She belongs to Asian ancestry.

She is married to Samir Patel. The couple met when Sangita was 18 and Patel was 24 years old. At the time he was a medical student. Patel is a board-certified diagnostic radiologist with Radiology, Inc. specializing in breast imaging, interventional breast procedures, and bone densitometry. He is the chief of radiology at Guelph General Hospital.

She has two daughters known as Ava and Syla.

Is Sangita Patel an Engineer?

Sangita is an engineer. She worked as an engineer until she got her professional engineering designation. During an interview she revealed that she went into engineering partly because she loved math. She was also trying to prove to herself that she could be as good as any male out there as his uncle had said that females could not be engineers.

“I went into engineering partly because I loved math and science. They were my favourite courses in high school. I think I was trying to prove to myself that I could be as good as any male out there. It was actually my uncle who said that females could not be engineers, and I think that’s the reason I did it. I
didn’t even know what engineering was all about, but I loved math and science and that’s where guys in those courses were going, so I thought why don’t I give it a try? I loved doing a lot of hands-on work with my dad – I loved to fix cars and VCRs, I fixed my Commodore 64, so it’s part of who I was, but I
didn’t really know what I wanted to do until my last two years of high school when I decided I want to be an engineer.”

Patel is the host of ET Canada Weekend on Saturdays at 7:30 p.m. ET/PT on Global, delivering in-depth celebrity interviews and exclusive features while bringing viewers the biggest stories of the week. She joined ET Canada in 2014 and has delivered entertainment news and travelled the globe to interview the biggest stars in Hollywood.

She began her career in media as a volunteer at Rogers, where she did film festivals, she worked for Toronto Living, she did another show as well for ATM, which is an Asian Television Network, and had the opportunity to host and do her own questions.

She was later picked up at The Weather Network and soon she joined CityTV where she was a weekend weather specialist for Citytv news 6 and 11 news.

Sangita Patel How To Win

Sangita is the host of HGTV’s Home to Win, a home renovation reality show. The show features contractors and designers from all of the network’s original productions collaborating on the renovation and design of a single “dream house”, which will be awarded to a registered viewer at the end of the series.

Where is Sangita Patel From?

Sangita was born in Canada to Indian parents.