"> Dale Brisby Bio, Age, Family, Wife, Ranch, How To Be A Cowboy, Net worth
Skip to content 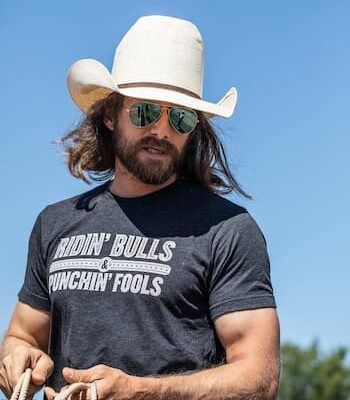 Dale Brisby is a rodeo competitor, YouTuber and ranch manager atRadiator Ranch Cattle Company. He is a star on Netflix’s docuseries, ‘How to Be a Cowboy’.

It is alleged that Dale’s real name is Clint Hopping

He celebrates his birthday on February 12

He has a Master’s degree in Agriculture from Texas A&M University.

Dale hasn’t revealed much about his family but he has a brother known as Leroy Gibbons, who is a ranch expert and recording artist. He released his album Unsettled in March 2021. He also features alongside Dale on ‘How To Be a Cowboy.’ In the show he describes himself as the 180-degree opposite of Dale and has a low-key, ongoing competition with him on a daily basis. “He works harder than he ought to, so it’s my obligation to work less.”

He also has a sister known as Dancey Brisby. She also makes an appearance on the docuseries.

His marital status is unknown; has managed to keep his personal life private

Dale is a Texas bull rider whose rodeo career began at an early age. He started by riding sheep, then graduated to steers and bulls, and went on to college rodeo. Where he obtained an undergraduate and a graduate degree in – ag leadership and education. According to his Linkedin account, he began riding in July 1967.

He is also the owner of Rodeo Time which he founded in 2013, he sells collectible items like stickers, expertly designed t-shirts, and hats.

Brisby is the ranch manager at Radiator Ranch Cattle Company since May 2004. The ranch is located in Winnebago, Texas.

Dale hardly removes his sunglasses while doing shoots. He said he gets asked why he wears the sunglasses all the time which he explained “Maybe, it’s just so bright. Why not wear sunglasses and a hat to help?”

Dale Brisby Netflix How To Be A Cowboy

Dale is the star of Netflix’s docuseries, ‘How to Be a Cowboy’. The docuseries delves into the world of country life, true American cowboys, and rodeos as Dale Brisby trains a whole new generation in the industry. He helps them hone their skills through first-hand experiences to keep cowboy traditions alive, all the while having fun in real life and on social media.

He features alongside his brother Leroy and a pal named Cheech. Dale has also hired interns; Donnie Ray Daytona and Jorden Halvorsen, who he trains how to be cowboys and cowgirls.