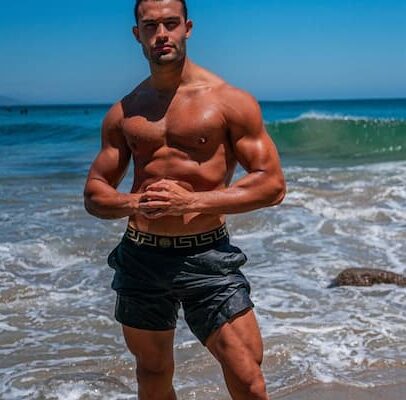 Sam Asghari is an Iranian model and trainer who is the founder of Asghari Fitness program. He is the fiance of Britney Spears after the couple got engaged on September 12, 2021 after almost 5 years of dating.

He was born Hasam Asghari

Sam is of Iranian ancestry.

He is an Iranian national.

Sam has not revealed his religious belief.

Where Is Sam Asghari From

Asghari was born in Iran and immigrated to the US in 2006, at the age of 12. He revealed in an interview with Forbes that she left her sisters and mother in Iran as they were still going through FBI check and immigration process. She added that he encountered culture shock and didn’t even speak English.

“I left three of my sisters behind, my mom behind. My dad was out here in America and I hadn’t seen him in about five years or so. It was definitely a culture shock, coming out here with a completely different language to speak. I didn’t speak a word of English and it was a weird age where I was finally so comfortable with my friends and [I had to] leave them behind to start a new life. So when I got out here, it was very different but I always had a positive mindset. I always knew that I was coming to a country where opportunity was the equivalent to gold. I was brought up by my dad knowing and understanding that we were coming here for a better life.”

He attended Westlake High School in Westlake Village where he played football. He later joined the University of Nebraska-Lincoln to participate in a football program but was cut from the program before his freshman year. He moved back to Los Angeles to play for Moorpark College in Moorpark, California. He later left to join Los Angeles Pierce College to study criminal justice.

Sam is the son of Mike Asghari and Fatima Asghari. His father immigrated to the US in 1996 as a tow truck driver.

Sam is a model who walked his first runway show in Palm Springs at 21 years old, he went on to book bigger gigs, including a Super Bowl ad for Toyota Prius and a small part in Fifth Harmony’s “Work from Home” music video.

He is also an actor who made his film debut in “Can You Keep a Secret?” playing the role of Omar. He played a security guard in “NCIS” Season 17. He also played Armeen in “The Family Business” Season 2. In 2021, he appeared in television series “Hacks” and “Black Monday.”

Asghari is a personal trainer and founder of Asghari Fitness program. He began his fitness journey after he stopped playing college football which saw him gain unwanted weight.

After he moved to America he immersed himself in sports, beginning with gymnastics, followed by soccer and football. He quickly realized his appreciation for more than just the physical aspects of those activities.

“Understanding the scientific part of it and studying nutrition after going through personal training and nutrition courses, I applied that information to myself and I was able to transform to an ideal version of myself.”

After college, he stopped playing football which saw him gain unwanted weight due to lack of discipline of exercise during a sports season.

“I thought to myself that it was the right time to finally lose the weight and start focusing on what I wanted to do, which was acting. In high school, I was working backstage and I always wanted to make it on-stage and make it to plays and I really wanted to act. When it came to my college years, I understood that was my passion and that was my go-to when it came to my future.”

He said his weight loss inspired his family and friends which saw him create the Asghari Fitness program.

“When I saw that people were so inspired by me, I decided to do something to help others and use my social media platform as an inspiration tool for other people to be able to get into the best versions of themselves. For me, fitness is not just for the way you look. Fitness has a lot to do when it comes to mental health, when it comes to motivation. When you take care of yourself, you are the best version of yourself for your family, for your friends.”

On September 12, 2021 Sam proposed to Britney Spears after nearly 5 years of dating. The couple began dating after they met on the set of Britney’s “Slumber Party” music video in October 2016. The two exchanged phone numbers and went out for sushi. Britney made their relationship Instagram official on New Year’s Day in 2017. The couple has 12 years difference.

Sam previously dated Mayra Veronica, Latin pop singer in 2015. The former couple met on the set of one of Mayra’s videos.

Sam has an estimated net worth of $1 million.