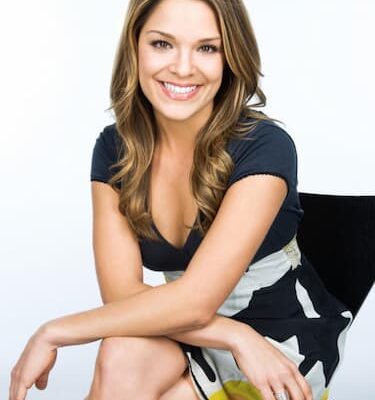 Sabrina Soto is an American interior designer and TV personality. She is the host of The High/Low Project and featured designer on HGTV’d. She is also a home style expert for Target and a licensed real estate agent who is LEED accredited

She is the daughter of Roberto FE Soto and Maria Elena Soto. Her parents however separated when she was 14 years old.

Her father was a teacher and media personality who worked with NBC News, The Washington Post and the NY Bureau Chief of Associated Press TV.

Her mother is a cook who instilled Sabrina’s love for Cuban food. She had a home decorating and staging business and Sabrina used to assist her when she was young.

She has a sister known as Natasha Yusta.

She is of Cuban ancestry.

Sabrina is not married (as of 2021) but she is in a relationship with an Allen Sheremet. He is a chef, ex-pro dancer and author of ‘Eat Your Heart Out Cookbook.’ He is a certified nutritionist, chef partner and healthy living advocate for Wellness in The Schools, part of Michelle Obama’s Chefs Move to Schools initiative. He has also appeared in FOX’s hit show, My Kitchen Rules, and The CW’s Terry Crew Saves Christmas. He also contributes to Cosmopolitan, US Weekly, and The Daily Meal.

Sabrina was in a relationship with Steve Grevemberg but parted ways in late 2018. The couple shares a daughter who was born in 2015 and according to Sabrina’s Instagram post, the two are ‘happy to be co-parenting together’.

She has a daughter known as Olivia Grey, born in 2015.

Soto has appeared on several TV Shows, she joined television in 1991 with an appearance in a segment of KTLA Morning News. In the late 2000s, she began working as a host and designer on several home renovation shows.

In 2009 she joined ‘Get It Sold’ after which she appeared on Real Estate Intervention or Extreme Makeover: Home Edition, Hell’s Kitchen, Rachael Ray, and Trading Spaces.

Sabrina is the host of The High Low Project on HGTV. In the show, she “is going to make lucky homeowners’ design dreams reality, where budget is no issue — yet. Sabrina will reveal their dream room, then the fun begins. She will now mimic this exact look that fits the couple’s budget. Piece by piece, Sabrina and her team will create smart, high-value replacements. Some of the original high-end pieces will stay as the best rooms splurge on some items and save on others. The final room and its price tag are then revealed.”

She has appeared on several HGTV shows, including White House Christmas, Get It Sold, Real Estate Intervention, HGTV Green Home and HGTV Showdown.

She has said that she found her first hosting job on HGTV in 2006 on Craiglist. “I woke up really early because I couldn’t sleep. I looked on Craigslist, and they wanted someone with design and real estate experience. It was amazing!”

She is the host of ‘Redesigning Life with Sabrina Soto’ podcast. It is a weekly podcast for motivation, truth and a little reminder that you’re not alone. She offers honest, inspirational, and candid conversations. Alongside with her guests they talk about life, growth, friendship and purpose.

Sabrina has not publicly spoken about her weight.