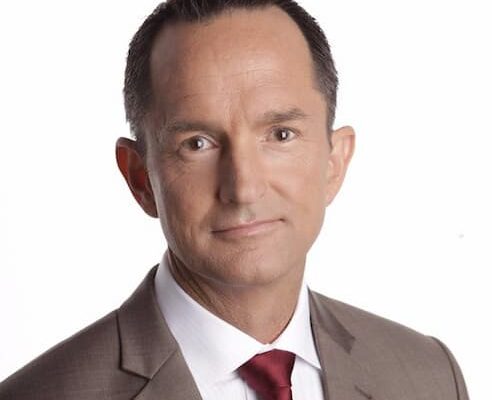 Joe O’Brien is the host of ABC News 24’s morning news program and was earlier on the co-host on ABC News Breakfast with Virginia Trioli. He has been with ABC since 1995 and was first based for the ABC in Rockhampton, and then in Brisbane as a reporter and presenter.

Joe has not disclosed his parents’ names yet but he does not hesitate to show off his parent’s pictures on his social media sites. He wished his parents well on their 51 wedding anniversary in December 2015.

Just booked my flight to see family in Far North Qld for Christmas. Nearly brought a tear to my eye.
Can’t wait to sit on that verandah in the balmy north.
Appreciate family more and more through the years. pic.twitter.com/qTxwgiwHOr

Joe has three siblings. His sister, Siobhan Jackson is the principal of the Lockhart River School, working on the educational front line in an Indigenous community that faces its share of addiction and abuse issues. She is credited with improving attendance rates and with introducing initiatives that have broken down racial barriers. She is the wife of the later nineties football legend Peter Jackson.

Joe is in a relationship but he has not revealed the name of his partner. In July 2021 he tweeted that he had just asked asked ” mate if he would be my bubble buddy during Sydney Lockdown.
Him: ‘I thought that was a gay joke. Is that true?'” He later tweeted that he said yes.

Just asked mate if he would be my bubble buddy during Sydney Lockdown.
Him: “I thought that was a gay joke. Is that true?”

Joe does not have a wife as he is gay.

O’Brien hosts ABC News 24’s morning news program and previously co-hosted ABC News Breakfast. Joe has been with ABC since 1995 and has more than 20 years of journalism experience.

He hosted the ABC News programs at 7 p.m. in both Queensland and New South Wales, as well as the national Midday Report on ABC television. Joe’s diverse reporting experience includes droughts and floods, as well as sports and politics.

He worked as a reporter and broadcaster for the ABC in Rockhampton and then in Brisbane. According to au.news.yahoo.com after coughing during his live reporting on  24th July 2021, on Sydney’s expanding Covid cluster, he was later obliged to address Covid concerns, and claimed he had gone for a test that turned out negative. Later on, he happily displayed his second AstraZeneca vaccine photo on Twitter.

Joe was a backup dancer in 1999 at Sydney’s famed Gay and Lesbian Mardi Gras. On November 9, 2021 he posted a picture of himself dancing at the 1999 event with a link to the YouTube clip of the performance.

He tweeted, ‘ABC gonna be broadcasting Mardi Gras again. Takes me back to 1999 when I got to be a backup dancer in a Danni show.’

OMG! ABC gonna be broadcasting Mardi Gras again. Takes me back to 1999 when I got to be a backup dancer in a Danni show 😛 .. https://t.co/eq1J8Tw70t pic.twitter.com/JEOS7GxEBC

Peter Jacksons was a nineties football legend who died in Sydney in 1997 of a heroin overdose. After his death, his troubled personal history was revealed. He had been a victim of sexual abuse by a housemaster and football coach while he was in his early teens at boarding school.

He earns an estimated annual salary of $63,000 dollars.

He is believed to have a net worth of $ 1 million dollars.