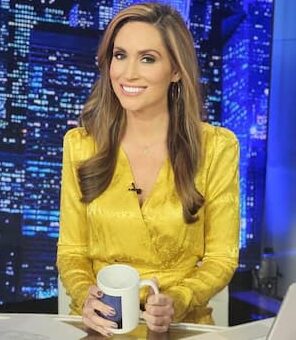 Rhiannon Ally is an Emmy award-winning American media personality and author. She is a fill-in anchor and reporter at ABC News. She is a former evening news anchor at KSHB-TV, the NBC affiliate in Kansas City, Missouri.

She attended Raytown South High School where she was inducted into the school’s hall of fame in 2012. She graduated from the University of Missouri-Kansas City in 2005 with a Bachelor’s degree in Broadcast Journalism. She was initially studying pre-law and political science but a journalism professor encouraged her to change her major to broadcast journalism.

Rhiannon is married to fellow journalist Mike Marza (formerly known as Mike Marusarz). The couple got married on October 9, 2008 after dating for two years. The two first met while they were both working at WIBW. Mike Marza serves as a general assignment reporter and fill-in anchor for Channel 7 Eyewitness News. He previously worked at KSHB-TV where he served as one of the main evening co-anchors of the 5:00 p.m., 6:00 p.m., and 10:00 p.m. weekday newscasts.

The couple co-anchored KSHB evening news, making them the first husband and wife anchor team in the history of local news in Kansas City.

Rhiannon is a fill-in anchor and reporter at ABC News. She joined the station in December 2021. She formerly served as the main evening anchor for 5, 6:30 and 10pm weeknight broadcasts for KSHB 41 Action. She was also the single host of 6:30 show delivering a fast-paced breaking news, entertainment and national news.

During her tenure, she anchored live coverage of a tornado outbreak that hit KC Metro, the massive fire that killed two Kansas City Firefighters. She also field anchored KC Royals World Series run including the parade and rally with 800,000 fans. She hosted memorial service for murdered police officer killed in the line of duty. She also emceed for KC Fashion Week and other charities events across the city.

Prior to joining KSHB-TV in June 2015, she worked for CBS News where she co-anchored “CBS4 This Morning” and “CBS4 News at Noon” at WFOR-TV in Miami, Florida. While at WFOR in Miami, Ally anchored breaking news from across the country including the Boston Marathon Bombing and Hurricane Sandy. As a new mom herself, Ally also started her own weekly series focusing on modern day parenting, and incorporated Miami hot spots for fitness, food and fun for moms.

She previously co-hosted the nationally syndicated lifestyle and entertainment program “Better TV” where she conducted one-on-one interviews with a long list of news makers including Madonna, Denzel Washington, Caroline Kennedy, and Gloria Steinem.

She began her on-air career in Topeka, Kansas, as a morning anchor at WIBW-TV, where she won a Kansas Association of Broadcasters Award for best Morning Show and was voted one of Topeka’s favorite television personalities. She later joined Meredith as a traffic anchor for the morning show and was also a fill-in anchor.

She is the author of “Mommy, Please Don’t Go to Work!” It is a children’s book which tells a story of for young children feeling sad when mom leaves for work. Leo and his sister, Luci, try to get Mommy to stay home from work. But when a mishap at their school threatens to cancel a bake sale, Leo and Luci’s Mommy jumps into action. Mommy is a TV reporter and she can rally the community to help.

The book was inspired by her then four-year-old son, who begged her, “Mommy, please don’t go to work!”.

There is no available information available on whether Ally is Hispanic or not.

She earns an estimated annual base salary of around $20,000.