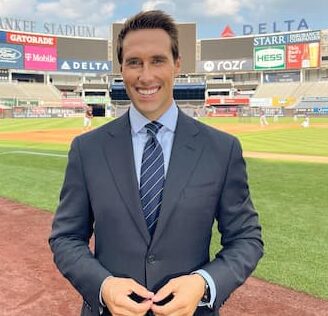 Mike Marza is an American news anchor and reporter for WABC-TV in New York City. He serves as a general assignment reporter and fill-in anchor for Channel 7 Eyewitness News.

He has a Bachelor of Arts degree in Communication Studies from the University of Missouri, Kansas City.

Mike married his wife Rhiannon Ally on October 9, 2008. The couple had dated for two years prior to getting married.  Rhiannon Ally is an Emmy Award-winning journalist and author. She is an ABC News fill-in anchor and reporter. She is a former evening news anchor at KSHB-TV, the NBC affiliate in Kansas City, Missouri. She previously co-anchored “CBS4 This Morning” and “CBS4 News at Noon” at WFOR-TV in Miami, Florida.

Mike is a general assignment reporter and fill-in anchor for Channel 7 Eyewitness News. He joined the network in June 2019. During his tenure, he has covered Covid-19 breaking news developments, an ambush on a police precinct and a horrific Hanukkah attack at a Rabbi’s house among others. He reported from the pandemic epicenter of NYC and the BLM protests alongside George Floyd’s brother crossing the Brooklyn Bridge on live TV. He also helped lead the coverage of the Harvey Weinstein Trial from inside the courtroom.

He formerly worked at KSHB-TV where he served as one of the main evening co-anchors of the 5:00 p.m., 6:00 p.m., and 10:00 p.m. weekday newscasts. The role earned him two consecutive Emmy Awards for Best Anchor. During his tenure, he lead special coverage of President Trump’s three visits to Missouri and anchored live from the 2016 Vice President Debate in Virginia. He lead the station’s live coverage from the scenes of a massive downtown warehouse fire, neighborhoods devastated by a tornado outbreak and the site of a deadly mass shooting at a manufacturing plant.

He also led the station’s He traveled to Toronto and New York covering the 2015 Kansas City Royals World Series run and then co-anchored the championship parade and rally in KC in front of 800,000 fans. Mike also followed the Kansas City Chiefs to Pittsburgh and Foxborough co-anchoring live pre-and- post game shows for nationally televised games including the AFC Championship at Arrowhead Stadium. He had previously worked for the station for 5 years (January 2005 – December 2009) as a weekend anchor and reporter before leaving to become a freelance reporter and anchor for News 12 in Long Island.

Prior to joining KSHB, he was an evening news anchor for WSVN-TV 7News. He anchored the weekday evening news at 4pm, 5:30pm, 6:30pm covering local, national, and international breaking news stories. He also reported for the 10:00 p.m. and 11:00 p.m. broadcasts. During his tenure, he co-anchored five continuous hours of breaking news coverage when bombs exploded at the Boston Marathon. He also co-anchored 7News’ special report after the Sandy Hook Elementary School shooting. During the 2012 presidential election, he anchored live from Mitt Romney’s election watch party. He also reported live from Miami Heat Championship celebrations in 2012 and 2013.

He formerly worked at ABC News as a freelance correspondent and fill-in anchor of ABC News. He co-anchored the network’s popular overnight broadcasts “World News Now” and “America This Morning.” He also filed reports for the weekend editions of “Good Morning America,” “World News Now,” and “ABC NewsOne.”

He began his career as a summer intern at Fox News Channel as part of New York’s prestigious International Radio and Television Society Summer Fellowship. He was placed at Fox News Channel working for “Studio B” and “Fox Report” with Shepard Smith assisting in production duties of the broadcasts, writing exercises and live remotes at the United Nations. He later joined WIBW TV as an anchor and reporter and also a managing editor for all six weekend newscasts.

In addition, he has served as a guest lecturer for journalism and mass media classes at The University of Missouri-Kansas City (January 2005 – August 2009).

Mike was formerly known as Mike Marusarz but he changed his on-air name to Mike Marza after he joined WSVN 7 News.

Mike earns an estimated annual base salary of $80,000.