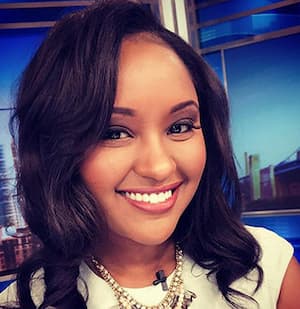 Rahel Solomon is an American media personality serving as a general assignment reporter for CNBC Business News. She previously served as a morning news anchor for CBS3 in her hometown of Philadelphia and also worked for CBS 4 in Denver as a morning reporter and fill-in anchor.

She belongs to the African ethnicity.

Solomon attended Archbishop Prendergast High School for Girls in Drexel Hill, PA, and later graduated with high honors from St. John’s University, earning a bachelor’s degree in finance. She also earned a master’s degree from the Medill School of Journalism at Northwestern University.

Rahel was born in Sudan to Ethiopian parents. Her family then moved from Sudan and settled in West Philadelphia, PA, when she was three years old., She grew up in Delaware County and West Philadelphia. She has not revealed the names of her parents but she posted a photo of her and her mother on her Facebook page on May 13 2018 with a caption,
“Also wishing my dear mother and best friend a Happy Mother’s Day!”

Rahel also posted another photo attending an event with her mother on 19 June 2018 on her Instagram.

Solomon was brought up alongside her two brothers Sammy and Abel. She hasn’t revealed any further information regarding them.

Solomon has not revealed any details regarding her marital status but it is rumored that she might be in a relationship with FOX Philly AM Anchor, Mike Jerrick. In 2017, the two were on vacation in St. Maarten at the same time. They didn’t post pictures together, but each posted a picture of themselves on the same spot. It could have been only been a coincidence hence none among the two has come clear regarding the rumors.

Rahel also referred to Jim Donovan, Anchor/Consumer Reporter at CBS Philly as her work husband on her Twitter account, and also in 2019, her Valentine’s day post has given life to new speculations regarding her relationship as Jim Donovan posted a picture with Rahel on Valentine’s Day. Further, Rahel also re-tweeted the picture wishing him a happy Valentine’s.

Rahel has kept her private life off the limelight and she hasn’t given any details on whether she has any kids.

Rahel joined CNBC in March 2019 as a general assignment reporter. She is based at CNBC Global Headquarters, and her reporting appears on television and CNBC’s digital platforms.

Prior to joining CNBC, she previously served as the co-anchor of CBS 3 Philly Eyewitness News This Morning and Eyewitness News at Noon and also anchored the weekend morning news. She joined CBS 3 as a general assignment reporter in September 2015. Here, she witnessed much history in the City of Brotherly Love, including the visit of Pope Francis for the World Meeting of Families in 2015, the 2016 Democratic National Convention, and the Philadelphia Eagles winning their first Super Bowl in franchise history by defeating the New England Patriots in Super Bowl LII in 2018.

Solomon was also a reporter and fill-in anchor for KCNC-TV, the CBS-owned station in Denver, CO. While there, she was named the Colorado Association of Black Journalists’ Broadcast Journalist of the Year in 2015. Prior to that, she was a multimedia journalist for WSAZ-TV in Charleston, WV, and served as a production assistant at NBC10 in Philadelphia.  She was also a reporter for The Torch, the independent student newspaper.