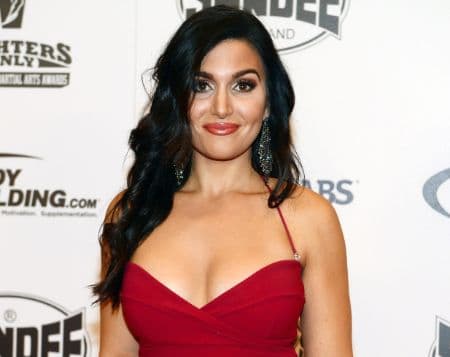 Molly Qerim is an American television personality and the host of ESPN’s First Take. She previously hosted NFL AM, a weekday morning show on NFL Network, as well as NFL Fantasy Live.

Qerim was born at Yale-New Haven Hospital and raised in Cheshire, Connecticut, where she graduated from Cheshire High School before going on to the University of Connecticut to get a Bachelor of Arts in communications with a minor in business administration. Quinnipiac University awarded her a master’s degree in broadcast journalism.

She is half Italian and half Albanian.

Her father is of Albanian descent whereas her mother was of Mediterranean descent. She has not revealed any more information about them.

Qerim is single. She was previously married to former NBA player and ESPN broadcaster Jalen Rose on July 20, 2018. Unfortunately, Rose filed for divorce from Qerim in December 2021, according to TMZ Sport, after the couple had been separated for almost a year.

Who is Jalen Rose?

He co-hosts the ESPN chat show Jalen & Jacoby with co-host David Jacoby and is an analyst on NBA Countdown and Get Up! He is the founder of the Jalen Rose Leadership Academy, as well as the author of the New York Times best-selling book, Got to Give the People What They Want and the producer of the ESPN documentary The Fab Five.

She announced in one interview about suffering from severe endometriosis. Qerim is a philanthropist and ambassador for Boys and Girls Clubs of America, the Innocence Project, and an endometriosis awareness.

Qerim is a well-known female face and voice who hosts ESPN’s popular morning show, First Take. Qerim, an Emmy Award winner, collaborates with Stephen A. Smith. She uses interview segments to demonstrate her ability to connect with a wide range of guests in this role. When First Take travels to major athletic events as an on-site presence for ESPN, Qerim thrives in front of a live audience.

Additionally, Qerim began her career at ESPN in 2006, where she worked for four years on digital and mobile platforms. This earned her an Emmy in 2008 for her work on Fantasy Football Now. When Qerim returned to ESPN in 2015, she was instantly offered the job of host of First Take, which she still retains. Aside from covering all of the championship events, Qerim has extensive expertise covering celebrity red carpets. A-list musical and TV/film guest interviews, UFC/MMA coverage, tennis, boxing, and other sports.

She earns an annual salary of approximately $500k.

Her networth is estimated at $4 million