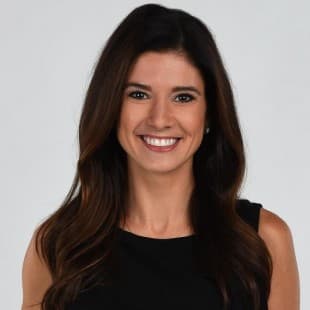 Jen Lada is an ESPN reporter and host. She primarily appears on College Football Live and College GameDay Built by The Home Depot. Lada also contributes to ESPN’s storytelling brands SC Featured, Outside the Lines, and E:60 as a Sports Emmy-winning features reporter.

She was born on January 14th, 1981 in Spring Grove, Illinois, in the United States.

She stands at a height of 5 ft 7 inches tall.

Lada went to Marian Central Catholic High School, where she excelled on the cross country and track teams. Her athletic prowess earned her a partial scholarship to Marquette University, where she earned a bachelor’s degree in broadcast journalism.

She has not disclosed her parent’s information to the public yet.

She has been officially married since October 2, 2017. Her lovely husband Dario Melendez is a former ESPN journalist. Lada was in a previous marriage with Sean Reti her university sweetheart.

She is a loving mother of three children, Chase, Layla, and Keira.

Lada primarily appears on College Football Live and College GameDay Built by The Home Depot on ESPN. In 2016, Lada began working as a features reporter for College GameDay and as a host for College Football Live. She has contributed a number of noteworthy pieces to GameDay. Jen brought up the Sports Emmy-nominated “UP Syndrome” about Alabama coach Nick Saban and Tuscaloosa resident Walt Gary.

Additionally, Lada won her first Sports Emmy Award in the Outstanding Short Sports Documentary category in 2020. This was due to the E:60-produced documentary “Hilinski’s Hope,”. It was about South Carolina quarterback Ryan Hilinski and how the heartbreaking loss of his brother Tyler influenced his life both on and off the field,  The poem has received a lot of appreciation for its ability to assist people who are dealing with mental illness.

Moreover, Lada’s work on SC Featured has led to other possibilities, including Sunday NFL Countdown and coverage of two Special Olympics World Games for ESPN. She hosted High School Lights, White Sox pre-and post-game shows, and the trivia show Beer Money on SportsNet Central. Lada’s work with SC Featured also includes a feature on Chicago Cubs first baseman Anthony Rizzo, who talks about how he beat cancer when he was 18 years old. She was also the host of the SC Featured audio podcast in the past.

She’s mostly seen on College Football Live and College GameDay Built by The Home Depot. Lada contributes to ESPN’s storytelling brands SC Featured, Outside the Lines, and E:60 as a Sports Emmy-winning features reporter. She formerly worked as a reporter and presenter for Milwaukee’s WITI-TV and Rockford, Illinois’ WREX-TV. In 2011, the Wisconsin Broadcasters Association awarded her the Best Sportscast 1st Place award at WITI. In addition, the Milwaukee Press Club awarded her piece to a Milwaukee lady who raced across the United States to raise public awareness for Multiple Sclerosis Best Feature 1st Place.

She earns a salary of approximately $200 thousand annually.

Her networth stands at an estimate of $2 million.