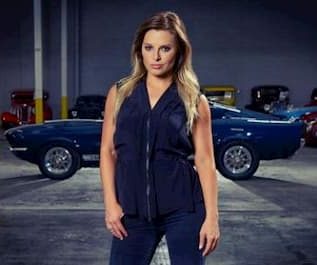 Cristy Lee is an American TV host and reporter serving as a field reporter and correspondent of X Games Austin on ESPN & ABC.  She is a co-host of All Girls Garage on Velocity Network and Barrett-Jackson LIVE on Discovery Channel & Velocity Network.

Lee is the daughter of Barry MacCoy and Jean MacCoy. Her father owns and operates an auto garage, Import Auto Service, in DeLand and is a former instructor at the American Motorcycle Institute in Daytona Beach, which trained motorcycle and marine mechanics. Her mother is a teacher. They live in Deleon Springs.

Lee studied dance at Daytona State College and after graduation, she moved to Detroit. In 2016 she auditioned and made the Detroit Pistons Dance Team ‘Automotion’. She also performed for the MISL Dance Team. She soon began emcee work as a game show host at a local Detroit casino, managed a small talent agency, and joined the Autoshow circuit as a Narrator for Chrysler / Dodge /Jeep.

Cristy is a motorcycle enthusiast with her passion spinning from her childhood as her father was a local shop owner and mechanic. She revealed that she spent her days “lusting over pricey sports cars and flipping through automotive magazines, helping my dad with his garage projects here and there, but I didn’t really get into wrenching until later down the road, when my garage started to fill-up with a motorcycle of my own.”

She bought her first motorcycle at the age of 18. When she moved to Michigan from Daytona she ventured out to the race track with a motorcycle turning her first laps in 2007.

She added that she loves that the attraction to the show isn’t just about how the rides turn out, but also the history of the cars and their owners.

“Something that is really important about Garage Squad is that it is all about the story. The vehicle is important, we want to see cool cars, but it’s more about the story of that ride and the owner and that’s what really sets this show apart.”

In March 2020 Lee revealed in an Instagram post that she had undergone an emergency appendectomy after a remodeling went wrong.

When remodeling goes wrong ? JK JK ? but the last 2 days have been interesting to say the least! Ended up in the ER, needed an emergency appendectomy, pre-op, surgery, post-op, 1/2 a cup of juice and after only 16 hours total, they booted my ass outta there! And let me tell you, the hospital is NOT where you wanna be right now…. Unlike a typical ER scenario, where patients are admitted by level of pain/severity of their condition, it was basically first come first serve, as COVID is life threatening. I had to wait in line by the entrance doors pacing and hunched over in pain for other patients coming in with cold/flu-like symptoms, no nurses or medical staff would come within 6ft of anyone before admittance (I think that changed to 10ft once I told them I had a fever) I had to shout my information across the desk. Oh, and absolutely NO visitors allowed under any circumstances in almost any condition, and yes, I wore my own face mask inside the hospital walls as did all of the medical staff. I don’t want to paint a picture that the hospital was like the movie Outbreak or anything, but these are pretty crazy times and I’m grateful to have been discharged in record time and back home safe to rest and heal up ??? ⠀ ⠀ ⠀ ⠀ ⠀ ⠀ ⠀ ⠀ ⠀ ⠀ ⠀ ⠀ ⠀ ⠀ ⠀ 1 – stay safe, stay home…medical staff were already overwhelmed w/ this virus… don’t be forced to go in if you can prevent contracting it and/or spreading it – BE EMPOWERED to make the choice 2 – surgery went well, caught it before it burst ? I’ll be back to normal in 2-3 weeks Appendix free! 3 – massive shoutout to ANY & ALL Dr’s, nurses, medical staff, literally anyone in the medical field for persevering and risking their lives to help other people during these trying times and always ?? THANK YOU

Where Is Cristy Lee From? Daytona Beach, Florida.

What is Cristy Lee Net worth? Under review

“All the walls are plumb in this bath so leveling everything was super easy” ~ said me never ??vanity, terlet, shower doors, and a bunch of other stuff finally in…see my stories for more pics ? #behindonposting